Customers can sign up for the service at an introductory price of €2.99 per month 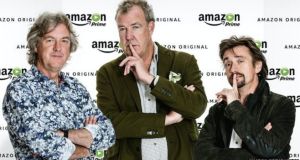 The Grand Tour, the new series from former Top Gear presenters James May, Jeremy Clarkson and Richard Hammond, is available exclusively on the Amazon platform

Amazon’s Prime video service has expanded to over 200 countries, including Ireland.

The service, which is a rival to Netflix, offers access to popular Hollywood movies and TV shows, as well as award-winning original programmes such as Transparent and The Man in the High Castle.

The Grand Tour, the new series from former Top Gear presenters Jeremy Clarkson, Richard Hammond and James May, is also available exclusively on the Amazon platform.

Subscribers can watch anytime, anywhere through the Amazon Prime Video app on Android and iOS phones and tablets, Fire tablets, popular LG and Samsung Smart TVs or online at PrimeVideo.com. They can also download all titles to mobile devices for offline viewing.

French, Italian, Portuguese and Spanish subtitled and dubbed versions of some shows are available and Prime Video members can also control how much data they use when streaming and downloading programmes.