More than seven out of ten new registrations came from businesses 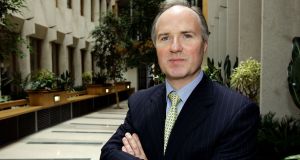 IEDR chief executive David Curtin said 2016 was “one of the best years” for the .ie domain in the last five years

There were 34,615 new “.ie” web domains registered in Ireland last year, representing the second highest year for new registrations since 2011.

There was a total of 221,871 .ie domains registered in Ireland and around the world at the end of 2016, according to new figures released today by the IE Domain Registry (IEDR), the company responsible for managing the domain name extension.

More than seven out of ten new registrations in 2016 were made by businesses, including both corporate bodies and sole traders.

There were 2,390 registered internationally, which represented a 4 per cent increase on 2015.

Two thirds of new registrations came from Leinster, followed by Munster (19 per cent), Connacht (8.5 per cent) and Ulster (5 per cent).

Fermanagh registered only 31, the smallest number in Northern Ireland and on the island of Ireland overall. Leitrim registered the fewest in the Republic with just 130.

IEDR chief executive David Curtin said 2016 was “one of the best years” for the .ie domain in the last five years. “More than 90 domains were registered every day, and the majority of registrations were by businesses,” he said.

“This indicates that many companies and sole traders understand the importance of having a website and the value of .ie, which helps to tell the world that they are Irish.

“However, some Irish SMEs do not fully appreciate a website’s power to transform their business, particularly in terms of opening up new revenue streams and growing customer bases through e-commerce.”

Mr Curtin said the slow uptake of e-commerce in certain areas is linked to a number of factors, including the quality and availability of broadband infrastructure in rural areas.

“This remains an insurmountable barrier for many SMEs located outside the big cities and major towns,” he said.

“On a positive note, ongoing e-commerce mentoring from business associations and government is beginning to help rural SMEs’ attempts to trade online and improve their digital skills.

“The Irish internet industry, business groups and leaders, and government representatives must continue to work together to make sure that the benefits of e-commerce and the wider digital economy are enjoyed equally across the country.”

1 Why we should be slow to use tracking apps in coronavirus response
2 Unemployment rate jumps to 16.5% in Republic
3 Lockdown exit: How can Irish economy reopen without big health risks?
4 Pandemic payments will ‘significantly’ support incomes – ESRI
5 Bank puts business owner on hold for month on Covid finance
Real news has value SUBSCRIBE