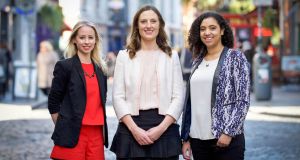 Irish start-up GirlCrew is heading to the US to represent the European Union at the upcoming SXSW Interactive festival next month.

The Dublin-based network was one of more than 220 companies that entered the competition organised by Startup Europe. Only 10 were chosen to join the EU delegation.

“It is perfect timing as we are just getting ready to launch an app, and the US will be our main target market initially,” said Irish Times freelance reporter Pamela Newenham, who co-founded the start-up with Elva Carri and Aine Mulloy.

Other start-ups attending as part of the EU team are Spanish start-up Oblumi, which developed a device that works as a digital infrared thermometer when paired with a mobile phone; Greek firm Citycrop, which has developed an automated indoor farming device; and Swedish company Moggie, which has developed a smart collar and mobile apps for cats.

GirlCrew, a global network for women to make new friends, now has more than 80,000 members in 46 locations around the world, including Austin, Dallas, San Antonio and Houston in Texas.

“It’s great to see strangers become best friends through our network. We’ve seen girls become so close they’ve moved in with each other and even become bridesmaids for one another,”said Ms Mulloy. “This is the best part of the group – once you join you can chat and meet with such a wide variety of people. The advice and support they offer each other is great to see.”

Among the other meet-ups to evolve from GirlCrew’s members are knitting groups, book clubs, entrepreneurs’ brunches, and a “trips and travel” group, that has resulted in members meeting for holidays.

The SXSW competition is not the first time GirlCrew has come out on top. Last year the social start-up was named overall winner of the Irish leg of international start-up competition Start TLV. The company beat competition from finalists including Creva Club, Popertee, Effy, Derilinx, Recipe Guru, Hello Bezlo and Traffic Attic to clinch the top prize.

In 2016, the founders were invited by Facebook to California to meet Mark Zuckerberg and Sheryl Sandberg.

1 If lockdown has morphed from tactic to strategy, the State has failed
2 John FitzGerald: North needs reform more than unity
3 How long can Government afford to keep State pension age at 66?
4 Consumer mood darkens, businesses react to Level 5 and Diageo launches Guinness 0.0
5 Guinness brings out a non-alcoholic version of the black stuff
Real news has value SUBSCRIBE