Interview: Seán Bolger of Imagine claims the route to rural connectivity is wireless 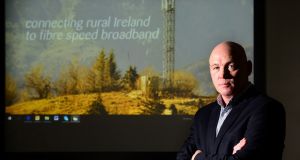 Remember when telecommunications was just Telecom Éireann: a single entity, running a single infrastructure? Sure, it was bloated and uncompetitive, and yes, the market couldn’t have remained as it was with the advent of mobile and the internet, but are we really better served by the tangled mess of technologies and overlapping infrastructures that now prevail?

Today, the number of firms offering phone and broadband bundles across fixed-line, fixed-wireless and mobile platforms is heading towards 70, and we’re about to introduce another weave to the tapestry in the form of the National Broadband Plan.

In theory, Imagine boss Seán Bolger should view this as an existential threat. His company supplies fixed-wireless broadband to rural Ireland, a technology and customer base that’s likely to be cannibalised by the Government’s scheme.

But Bolger, who has made a career out of fighting monopolies, is unperturbed.

“The reality is, it’s completely impracticable . . . it won’t happen,” he says.

It’s a bold claim given the political clout behind the plan. There are now two Government departments and a task force in charge of overseeing its implementation.

Imagine’s Dublin headquarters, a rather nondescript office space located in a corner of Sandyford Business Centre, doesn’t feel like the staging post for a mass assault on Ireland’s telecommunications market, but the company has a reputation for being understated, despite its outspoken boss.

The bulk of our conversation is taken up with the National Broadband Plan and, as Bolger sees it, the Government’s misguided insistence on a fibre solution.

He says the cost of linking 937,000 homes – the proposed intervention area – to a high-speed, fibre-to-the-home network is prohibitive, and likely to cost way more than the €1 billion estimate currently pencilled in.

The Department of Communications has never specified the technology to be deployed, but Bolger claims it’s implicit. “Politicians have basically told everyone it’s going to be fibre to the home,” he says.

Either way, the three shortlisted bidders – Eir, Siro and Enet – are basing their bids around a fibre solution.

With the potential to deliver download speeds of up to one gigabit – 1,000 megabits – per second (Mbps), proponents say fibre will guard against early obsolescence, a feature of former Irish broadband initiatives.

“The problem with fibre is that it’s extremely expensive and not really viable on a commercial basis outside of densely populated areas,” he says.

But isn’t this just sour grapes? After all, Imagine was one of the two consortiums to be ejected from the process last year. “Our bid did not fail. We were excluded on a technicality,” he says.

The technicality, he claims, relates to its backer, Chinese telecoms giant Huawei, and the fact that the latter’s holding company wasn’t included as a member of the Imagine bid, which also included Australia’s MacQuarie Capital and infrastructural group Black & Veatch.

Bolger won’t elaborate on what he thinks went on behind the scenes, but it’s clear he believes the process was hung up on delivering a fibre solution to the exclusion of all others, including Imagine’s 4G wireless technology, which delivers high-speed internet access via radio signals rather than cables.

A recent survey of Irish broadband speeds by technology monitoring group Ookla, ranked Imagine second ahead of fibre rivals Eir, Vodafone and Sky, with an average speed of 77Mbps, and significantly ahead of the 30Mbps threshold specified in the NBP tender.

“Why we were excluded on a technicality is a matter for the national broadband team, but the result was that two effective competitors with major multinational backer funding were excluded from the process.”

This outcome favours market incumbent Eir, he claims, suggesting the former semi-State has pushed the department towards the most expensive technology option in order to delay the project and/or limit competition.

Eir has been accused of trying to disrupt the Government’s tender by several rivals, an accusation it denies.

“What started out as an extremely good plan has effectively been curtailed into a risky plan by the process.”

“The whole idea of the plan is to build a wholesale network, but if the wholesale cost of that network is so high so that it’s prohibitive, you’ll have very little competition, and who will pay for that? The consumer.”

To be fair to Bolger, he’s putting his money where his mouth is. The company is spending more than €1 million a month on the national rollout of its 4G long-term evolution (LTE) network.

Currently it has 50 live sites across the State and about 11,500 customers, with approximately 2,500 joining each month. It plans to grow this to 400 sites and 160,000 customers within three years, courtesy of a €300 million war chest stumped up by existing shareholders and new investors, plus cashflow from the business.

The sale of its retail business division, comprising up to 5,500 customers, to rival telco Magnet last year was part of this strategic shift in focus.

“We’re fed up talking about this and people not understanding it, so we decided to just go out and do it.

“In less than five months, we’ve rolled out our technology to nearly 500,000 homes,” Bolger says, noting it has had an additional 87,000 requests from prospective customers registering on the site or via social media.

To accommodate this expansion, the company has hired an additional 100 staff in the past year, bringing its total workforce to 275. It expects staff numbers at its three offices, two in Dublin and one in Cork, to grow to 350 within the next 12 months.

“We’re the first company that has quit the bulls**t, and gone into rural Ireland and delivered,” Bolger says, highlighting the rollout is being done on purely commercial basis.

The Rathfarnham-born entrepreneur has spent much of his telecoms career in arm wrestles with monopolies and big multinationals. His first serious foray into telecoms arena came in 1993, when he founded ITL, an international calls firm – at the time Telecom Éireann’s first and only competitor.

After merging the business with Norway’s Netsource in 1997, and buying up 15 other firms across Europe, he went on to sell it for $300 million. He bought back the company’s Irish business in 2003, merging it with Imagine, which had been established in 1998.

Bolger fought a legal battle with Eircom’s then mobile arm Eircell over its right to provide competitive mobile services. The High Court found for Imagine on a number of contractual issues, but rejected its contention that there had been a breach of competition law by Eircell.

At the time, Imagine had around 20,000 subscribers: Bolger estimates that Eircell’s actions cost him 80,000 new customers.

Around 2008, seeing the growth in demand for broadband, the company reinvented itself as a fixed-wireless provider, subsequently buying Irish Broadband and Clearwire to boost its infrastructural platform.

However, the company’s new iteration nearly foundered after it fell out with US telecoms giant Motorola, the supplier of its Wimax product.

A six-year legal battle – a record for the Commercial Court – ensued. The Irish company claimed in 2011 in the High Court that Motorola was supposed to have provided 234 base stations for its wireless network by the end of the previous year, but had only installed 125. Imagine said the delay had significantly depleted its capital and forced it to restructure debt.

Bolger says the company went to hell and back in its battle with Motorola, at one stage having to downsize the workforce by 50 per cent.

“What kept us going was a fundamental belief in what’s right and what’s wrong, and we don’t like being bullied.” He also points to the backing of shareholders.

“We take on very big projects and by doing that we tend to take on vested interests,” he says.

These days Imagine is 54 per cent owned by Bolger, commercial director Brian O’Donohoe, and the company’s management and staff. Another 30 per cent is held the Balthus consortium of investors and 16 per cent by listed venture capital group DFJ Esprit.

“Everything we do is down to a team of people. Whatever that concept, idea, we look at; it comes down to opportunity, strategy, team and money.”

He says the biggest challenge for Irish entrepreneurs is finance, highlighting the fact that all of Imagine’s fundraising takes place abroad. “Access to funding for entrepreneurs and businesses is nonexistent in the Irish market,” he says.

Bolger was there at the beginning of Ireland’s tech boom and has had a front row seat for the opening up of the telecommunications industry here. He might yet prove a dark horse in the race to bring broadband to rural Ireland.

Interests: Horse-riding, travel and doing nothing

Something you might expect: Passionate about the business, its people and taking on a challenge

Something you might not expect: He can switch off from work