How Facebook could target ads in the age of encryption 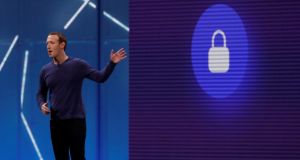 His convictions are so strong that he plans to merge the messaging services of Facebook, WhatsApp and Instagram into one encrypted system, meaning only the people who send and receive messages can view them.

But the Facebook founder has yet to say how the world’s biggest social media network, which generated $16.9 billion (€15 billion) in revenues in the fourth quarter of last year – largely from advertising on its news feed – will make money from such a radical overhaul.

Experts say there is one obvious solution: metadata.

This is the vast amount of context surrounding a message that can be viewed even when the content is encrypted.

Even though Mr Zuckerberg has cast the shake-up as a pivot towards privacy, Facebook could still mine and analyse users’ messaging metadata to help build detailed profiles for targeted advertising, in a move that could irk privacy activists and even regulators.

“By abstracting out and looking at who’s talking to who, for how long, and when . . . you can build up a very statistical picture of people very quickly,” said Alan Woodward, encryption expert and professor at the University of Surrey.

“In many ways, it is the context of what you say in those messages that is more important than the messages themselves,” he added.

Facebook has faced mounting pressure to give users more clarity and control over how their information is handled in the wake of the Cambridge Analytica scandal, as well as reports that it allowed device makers to access users’ personal data through special deals.

Earlier this month, Mr Zuckerberg responded to those concerns by announcing dramatic plans to integrate the three messaging services and introduce end-to-end encryption.

But the chief executive did not outline the group’s policy around metadata, which was first thrust into the spotlight in 2013 after it emerged in the Edward Snowden leaks that the National Security Agency collected phone call metadata of US citizens on a mass scale.

Facebook has declined to provide precise details of the messaging metadata it currently collects, but said it was largely used to rank people by how often they use Messenger, as well as monitor for abuse and spam.

The company also said it was too early to comment on how much or how little metadata it will gather when its three apps are integrated, although Mr Zuckerberg has suggested limiting how long metadata is stored for.

One method is known as pattern-of-life analysis, where data including location is used to understand a user’s habits over time

Facebook hopes to launch the combined platform next year.

Still, experts argue there are reams of this “data about data” that Facebook could potentially collect if user habits shift more towards walled-off messaging.

According to Jon Callas, a senior technology fellow with the American Civil Liberties Union and a former encryption expert at Apple, the information could include the host website of links that are shared, and picture or file names if they are shared between users.

Metadata could also help to classify what was in a photo – for example, a dog or a house – without a third party viewing the photo itself, he said.

“There could be a lot of intrusive scanning going on while only having metadata,” he added.

Research suggests that by analysing these patterns of communication, it is possible to make relatively accurate predictions about people’s personal lives, such as their age, gender, sexual preferences or personality traits.

One 2018 study by University College London researchers analysed the metadata alone of 10,000 Twitter users and found that it could match this information to their identity with approximately 96.7 per cent accuracy.

In the case of Facebook, the platform could also combine messaging metadata with the other personal information that it holds on users, such as what they like and share in its news feed, in order to build a behavioural profile of an individual and their friends.

“Applying statistical analysis to the metadata from messages with other data harvested by Facebook can lead to all kinds of inferences about what you are interested in, and predict what you might be interested in if exposed to it,” said Mr Woodward.

A Facebook spokesperson said the company does not currently use machine learning on metadata for targeted advertising.

One method is known as pattern-of-life analysis, where data including location is used to understand a user’s habits over time.

Using this, a platform such as Facebook might easily be able deduce where a user’s home and work is.

Taken to its logical conclusion, that platform could establish that a user typically walks from a train station to their office every day at a certain time – allowing them to serve that user with adverts for a particular coffee shop within a certain radius of that journey during that timeframe, for example.

Another method, known as link analysis, assesses a person’s network of connections to map out who is influencing who and what they might have in common.

“If you speak to someone regularly, it can assume that a lot of the behavioural indicators that it has for them, probably apply to you,” said Kalev Leetaru, senior fellow at Auburn University.

“When it comes to large-scale, very rich data sets and the privacy of those data sets, we need to think beyond whether a particular piece of information is sensitive or not, and take into account what this data could reveal about the person now or in the future when using a machine learning algorithm,” said Yves-Alexandre de Montjoye, assistant professor at Imperial College London’s department of computing.

Mr Callas said: “I want Mr Zuckerberg to say in very specific terms what they are going to do. [Otherwise] I worry they are going to be like the genie in the story that grants your wish but not in the way that you like.” – Copyright The Financial Times Limited 2019