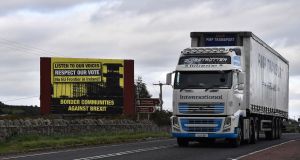 There has been a big rise in the number of businesses registering for customs numbers to allow them to continue trading with the United Kingdom after it leaves the European Union. Photograph: Charles McQuillan/Getty Images.

There has been a surge in the number of businesses registering for customs numbers to allow them to continue trading with the United Kingdom after it leaves the European Union.

Figures from the Revenue Commissioners show the number of companies registering for Economic Operators Registration and Identification (EORI) numbers increased from 200 in September to 301 in October to 436 in November before falling to 302 in December.

There had been 258 registrations between the start of this month and Tuesday.

A Revenue spokesman said it has been actively engaging with Government departments, trade representative bodies and individual traders “to ensure they are aware of their customs obligations in order to ensure that the majority of goods continue to move freely through our ports and airports post-Brexit”.

Revenue figures show a near five-fold increase last year in the number of companies applying for a trusted trade status known as Authorised Economic Operator. This allows companies to fast-track the import and export of goods and avoid costly delays at ports and airports.

A total of 76 applications for this status were received last year, though it was only granted in 21 cases. There have already been 10 applications for AEO status this year, almost the same number as for the whole of 2016.

It takes on average four to six months to secure AEO status.

Carol Lynch, a partner in charge of customs and trade at consultants BDO, expects “a huge increase” in EORI registrations given that there are 100,000 businesses intermittently trading with the UK.

“Getting an EORI is relatively quick so this should be done as soon as possible if you want to continue to import and export to and from the UK,”she said.

Revenue Commissioners chairman Niall Cody will tell the Oireachtas finance committee today that it was stepping up its recruitment and training for a possible no-deal Brexit. It plans to have more than 400 additional staff in place by the end of March, almost 50 per cent more than planned by that date in November.

Mr Cody says the Revenue will have its full 600-strong complement of additional staff to be hired to deal with Brexit in place by the end of this year, meeting that target 12 months earlier than planned.