Supermarkets gear up for lockdown, Rivada’s US bid, and your home security tech 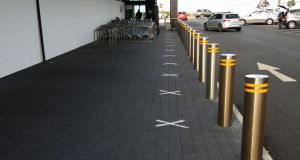 You are now entering Level 5, and supermarkets are ready. Photograph: iStock

Marquees to protect us from winter weather while queuing and traffic light signals at the door are among the measures being introduced by supermarkets to deal with today’s Level 5 lockdown, writes Mark Paul. The sector is expecting a surge in activity as most other retail outlets close and Christmas approaches.

Rivada Networks, the US-focused telecoms network company founded by Galway businessman Declan Ganley, has submitted its interest to the US government for a potential multibillion dollar contract to build a 5G network on US department of defense spectrum. Mark Paul reports Mr Ganley denied a CNN report that suggested the administration of US president Donald Trump is pressuring defence officials to award Rivada a contract without holding a competitive tender.

The Central Bank has submitted reports of suspected criminal offences to An Garda Síochána in relation to its investigation into the State’s tracker-mortgage scandal, the Oireachtas finance committee heard on Wednesday. Joe Brennan has the story.

Intensified negotiations between the European Union and Britain will begin on Thursday and “take place daily including weekends” in a race to reach a Brexit deal in time for the end of the year, writes Naomi O’Leary from Brussels. The development marks a significant shift in the direction of negotiations.

Moby, the State’s first electric bike-sharing scheme, is seeking to raise €300,000 in a crowdfunding campaign. Charlie Taylor has details of how the company plans to use the cash.

In her Net Results column, Karlin Lillington takes a look at this week’s move from the US department of justice to bring an antitrust suit against “the multinational search-and-everything-else giant, Google”. Could it, she asks, be a matter of locking the barn door long after the data-guzzling horse has bolted?

With longer, darker nights on the way, it might be time to start considering your home security a bit more. Ciara O’Brien surveys the best of the latest security technology on offer, from video doorbells to smart door locks and sensors.

In our Innovation section, columnist Chris Horn focuses on Robotic Process Automation, a growth area that sees computers imitate humans to the point where another computer can’t tell the difference.

We also profile Ant Group, the Chinese Alibaba affiliate that has struggled to realise its grand overseas ambitions.