SoftBank takes over WeWork as co-founder Adam Neumann steps down

Board agrees to Japanese group’s $6.5bn bailout package, with Neumann to get $1.7bn 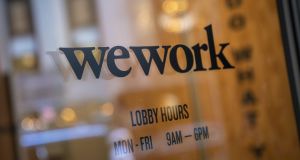 SoftBank’s proposal includes injecting $6.5 billion into WeWork, with $5 billion of that in debt, in a deal that values the company at about $8 billion.

The WeWork board agreed to a multibillion-dollar bailout and investment package from SoftBank on Tuesday, handing control of the cash-strapped company to the Japanese telecoms-to-technology group and releasing it from the grip of its co-founder Adam Neumann, according to people briefed on the matter.

SoftBank, which was already WeWork’s largest backer, is to pump billions of dollars into the shared office company through new loans and equity, and will provide Mr Neumann a nearly $1.7 billion package to step down from the board, the people said.

SoftBank’s proposal includes injecting $6.5 billion into WeWork, with $5 billion of that in debt, in a deal that values the company at about $8 billion, it was reported on Monday.

The Japanese group founded by Masayoshi Son is expected to pay Mr Neumann a roughly $185 million consulting fee that will also see him step down as chairman of the board, and will loan him $500 million to pay off debts of a similar amount, the people said.

SoftBank also plans to buy about $1 billion worth of stock from the co-founder as part of a tender for as much as $3 billion of shares from early investors and employees.

The board had considered a rival rescue financing package from JPMorgan, the bank that had led its attempt to go public and with which it has deep ties. But the Wall Street lender was unwilling to include the tender as part of its debt-financing, one person said. The bank believed the tender overvalued WeWork and acted as a bailout to Mr Neumann, they added.

The deal would cap a stunning fall for Mr Neumann, who co-founded WeWork nine years ago and at one point had claim to a stake in the company worth roughly $13 billion. But his role as chief executive atop the property group came to an end just days after the company aborted its initial public offering. His fortune is now worth a fraction of that earlier level.

The loans and payments from SoftBank to Mr Neumann will help alleviate a potential financial strain on the once high-flying WeWork chief executive. Mr Neumann had loans worth hundreds of millions of dollars outstanding to a number of Wall Street lenders this summer, and there were fears that a cash crunch at WeWork or a drastic repricing of his stake could raise the risk of losses to banks including JPMorgan Chase, UBS and Credit Suisse. Mr Neumann’s shares were collateral on some of those loans, and banks can typically demand margin calls if the value of such assets falls below a certain point.

WeWork and SoftBank did not respond to multiple requests for comment. – Copyright The Financial Times Limited 2019