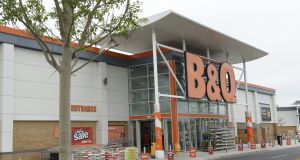 DIY retailer B&Q urged Leo Varadkar to cut job seekers’ benefit before he was elevated to taoiseach, so that it could find it easier to hire summer staff, the Sunday Business Post claims. Photograph: Brenda Fitzsimons

Sports Direct, the UK sports retailer founded by Mike Ashley, has approached Dunne Stores, led by Margaret Heffernan, with a view to buying up to seven of the Irish retailer’s premises, according to a report in the Sunday Times.

Mr Ashley, who controls the Heatons department stores chain in Ireland, has made little secret of his plans to expand in the Republic. Among the targeted Dunnes locations are its store next door to the sports retailer’s flagship outlet on North Earl Street in Dublin, according to the report.

The Sunday Times also reports that the Irish Bank Resolution Corporation, which entered liquidation in 2013, paid a Russian group $34 million (€30 million) to end a joint venture to recover assets owned by the family of businessman Sean Quinn.

IBRC, which comprised the former Anglo Irish Bank and Irish Nationwide Building Society, entered a partnership with part of the Alfa Group in 2013 to recover up to $500 million of Quinn property in Russia and Ukraine that the bank had had difficulty securing. However, the joint venture was disbanded two years’ ago after the recovery effort proved more difficult than expected.

The Sunday Business Post reported over the weekend that Johnny Ronan has held talks with the Abu Dhabi Investment Authority that may result in the Middle Eastern sovereign wealth fund investing in the redevelopment of office blocks at AIB Bank Centre in Ballsbridge. Mr Ronan’s Ronan Group Real Estate bought four blocks at the Ballsbridge site in 2015 and secured funding from the Wilbur Ross-backed WLR Cardinal fund and financier Jefferies LoanCore last year to redevelop the site.

DIY retailer B&Q urged Taoiseach Leo Varadkar to cut job seekers’ benefit before he was elevated to the top position in government, so that the company could find it easier to hire summer staff, the Sunday Business Post said.

The lobbying took place during Mr Varadkar’s trip to Paris on St Patrick’s Day, when he was approached by the senior government affairs adviser for B&Q’s parent company, Kingfisher. The effort was revealed in filings with the Lobbying Register.

A plastics firm that was previously part of businessman Sean Quinn’s cement-to-insurance empire has been sold to a Swiss company, Schweiter Technologies, for €48 million, the Sunday Independent reports.

The business, Athlone Extrusions, was founded in 1971 and taken over by Mr Quinn in 2004 as part of his purchase of the Burlo Group. Athlone’s management team subsequently bought the business from Mr Quinn.

The Sunday Independent also reported that An Post was seeking to increase its share of the Irish parcels market from 25 per cent to 35 per cent over the next four years. Parcels currently account for €120 million of revenues for the State-owned postal services company and it aims to increase this to more than €200 million in the coming years. The business was subject last year to a strategic review by Accenture.

1 How can I view my dead brother’s will if I’m not the executor?
2 Michel Barnier rejects UK’s call for Canada-style trade deal
3 Barry’s Hotel at €8m comes with potential to double in size
4 How to . . . move (almost) everything to your new phone
5 Credit Suisse among banks reprimanded over handling of $660m Abacha accounts
6 Irish company paid €1.2m a year by collapsed Blumenthal-linked Australian restaurant
7 The sadness you feel when your best friend at the office leaves
8 Aqua Dome in Tralee could close over insurance claims, directors warn
9 Goldman ‘vulture funds’ collect €465m from distressed Irish loans
10 Budget 2020: New emissions tax on new cars and used imports
Real news has value SUBSCRIBE