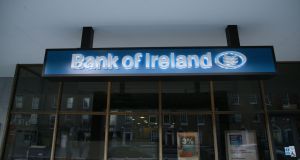 Shares in Bank of Ireland are set to be reclassified on Monday morning amid warnings from Fitch about the high level of non-performing loans still held by Irish banks. Photograph: Nick Bradshaw

Fitch warned over the weekend that the high level of problem loans in the Republic’s banks continue to weigh on the State’s credit ratings, as Bank of Ireland completed a corporate restructuring designed to protect taxpayers in the event of a future crisis.

Under the reorganisation, new shares in the Dublin-based bank will start trading on Monday morning.

Fitch, one of the world’s top three credit ratings firms, reiterated its “A” rating on Ireland late on Friday as the economy is expected to grow at 3.5 per cent this year to outpace euro area peers for a third straight year.

However, the agency highlighted that the Irish banking system remains weaker than most countries, with non-performing loans of almost 15 per cent as of the end of last year. That’s about three times the euro-area average.

Bank of Ireland is poised to complete a corporate restructuring on Monday morning when a new holding company becomes the group’s listed entity on the stock exchanges in Dublin and London.

The holding company is being set up to comply with incoming European regulations that are designed to minimise taxpayer bailouts and protect depositors in the event of another financial crisis.

The holding company would issue equity, senior and junior debt in future where investors could face losses if the bank ran into difficulty in the future under so-called “bail-in” rules. Deposits, however, would continue to enjoy greater protection, as they would remain in an operating bank a level below the holding company.

CreditSights, an independent debt research company, has previously estimated that Bank of Ireland may sell as much as €7.5 billion of “bail-in-able” debt - or what is called minimum requirement for own funds and eligible liabilities – under the new rules.

As part of the corporate restructuring, Bank of Ireland also took the opportunity to shrink its number of outstanding shares from 32.4 billion to 1.08 billion by issuing one stock for every 30 held up until now by investors.

Separately, AIB also intends to set up a holding company, but this has been delayed until later this year, as management had been preoccupied recently by the bank’s initial public offering on June 23rd.