Lucinda Chambers, ‘Vogue’ and the art of being sacked 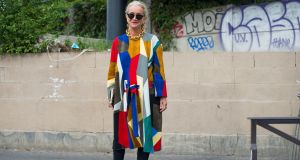 Lucinda Chambers at Paris Fashion Week in 2016. The former ‘Vogue’ fashion director has spoken candidly about being dropped by the British edition of the magazine

Last week, Lucinda Chambers broke two golden rules on how to behave when you have just been sacked. The former fashion director of British Vogue gave an interview in which she refused to pretend the break-up had been mutual: “I didn’t leave. I was fired.”

She then burnt all bridges by knocking the magazine where she had worked for 36 years and trashing the entire fashion industry.

According to her, fashion chews you up and spits you out. It makes people so insecure that every time they give a dinner party, they are in mortal dread of having the wrong napkins.

Glossy mags do not empower women but encourage them to buy ludicrously overpriced tat they do not need. Worst of all, they are in cahoots with advertisers, hence a “crap” cover shoot she did for the June issue of Vogue, featuring Alexa Chung in a black-and-white T-shirt designed by Michael Kors, a big advertiser.

We are supposed to disapprove of dirty laundry, but after reading Ms Chambers’ interview in Vestoj, an obscure fashion journal, I am all for it.

The stains on the Vogue linen were salutary for us to see, even though they were in predictable places.

The only shame is that people do not do this more often. Almost everyone who leaves under a cloud – or even under no cloud at all – keeps their mouth shut, partly out of good breeding and a feeling that bridge-burning is not in their self-interest.

But even if pragmatism does not gag them the non-disparagement clause they will have almost certainly been forced to sign will do the trick.

These clauses should themselves be disparaged. They get in the way of freedom of speech and allow companies to persist in behaving badly.

Everyone should be able to say whatever they like when they leave – so long as they do not give away commercial secrets.

There is little chance that corporate reputations would be destroyed undeservedly because the public is pretty good at distinguishing sour grapes from regular ones.

When the axe fell on Carol Bartz, the former chief executive of Yahoo, she ranted in an interview: “These people fucked me over.” Her choice of words gave a pretty big clue as to just how angry she was, and warned the public to take her disparagement with a pinch of salt.

By comparison, Ms Chambers’ tone was measured. She seemed merely to be speaking her mind.

Yet, even better than her truth-telling about one of the nastier industries was her proud use of the word fired. “I don’t want to be the person who puts on a brave face and tells everyone, ‘Oh, I decided to leave the company,’ when everyone knows you were really fired,” she said. “There’s too much smoke and mirrors in the industry as it is.”

This was delightfully frank. People hardly ever admit to having been sacked, partly for legal reasons and partly because we cling to the idea that it is a disgrace.

I have just looked for examples of successful people who have talked about being sacked, and what comes up is Steve Jobs – who does not count as he is (was) Steve Jobs – and a lot of celebs who were fired decades earlier from menial jobs.

People are sacked all the time. Sometimes they have done something disgraceful, but mostly they have not. The longer we work and the more we change jobs, the more likely all of us will get fired at least once. It is time the word was used in a less charged way.

There is only one thing in the interview that strikes a wrong note. “Truth be told,” Ms Chambers bragged, “I haven’t read Vogue in years. The clothes are just irrelevant for most people.” I have not read Vogue in years, either. In my case, I have not read it for 57, though I sometimes give it a quick skim at the hairdresser and always reach the same conclusion – the clothes are irrelevant.

Yet there is a difference between us. She was employed by Vogue for her entire adult life, and I was not. If you cannot bring yourself to read the magazine that pays you to be its fashion director, there is true shame in being fired after all. Ms Chambers should not have waited to be sacked. She ought to have resigned years ago.