Sean Dunne’s bankruptcy, objections to D4 co-living, and oil off the Cork coast 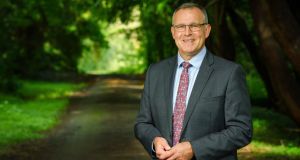 Providence Resources’ chief executive Alan Linn says he was attracted to the role earlier this year by the potential of the Barryroe oil and gas field off the coast of Cork. Photograph: Daragh Mc Sweeney/Provision

A lawyer representing Gayle Killilea, ex-wife of onetime Celtic Tiger tycoon Seán Dunne, told a US court on Tuesday that there is “a tentative agreement” to resolve her part of Dunne’s years-long US bankruptcy. Christopher Hoffman reports.

Arytza chief executive Kevin Toland and his wife Aisling are opposing the five-storey Bartra Capital co-living development proposal for 98 Merrion Road in Ballsbridge, citing Covid-19 fears. The are on a long list of objectors to the housing project, according to Gordon Deegan.

On the other side of Dublin, the owner of a site beside St Anne’s Park in Raheny in Dublin has again been granted permission by An Bord Pleanála to build homes on the land, which has been at the centre of multiple judicial review proceedings in the High Court. Olivia Kelly has the details

In our Interview this week, Providence Resources’ new chief executive Alan Linn tells Barry O’Halloran that he would not have taken the helm at the Irish oil and gas exploration company if it had not been for one thing: the potential of the Barryroe oilfield off the coast of Cork.

Reopening our schools will probably cause a spike in cases but we just have to carry on for the wider benefit of the country and the economy, according to our columnist Eoin Burke-Kennedy.

Backers including Bank of Ireland and the State are reported to have put €115 million into a new fund launched in the Republic by Peter Garvey and Jonathan Cosgrave, former managing directors with private equity group Carlyle in the Republic. Barry O’Halloran has the details.

The European Commission has formally approved a €¤50 million Irish scheme to support those working in the beef sector who have been affected by the coronavirus outbreak. Charlie Taylor reports.

Stay up to date with all our business news: sign up to our news alerts and our Business Today daily email news digest.