Scheme aimed at helping up to 42,000 farmers affected by the Covid-19 crisis 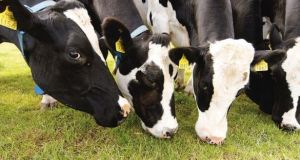 The European Commission has formally approved a €50 million Irish scheme to support those working in the beef sector who have been affected by the coronavirus outbreak.

The Beef Finisher Payment scheme, which takes the form of direct grants, is intended to help address liquidity shortages for up to 42,000 farmers adversely impacted by the Covid crisis between February and mid-June.

It is aimed at farmers with finished animals who suffered from both reduced prices and other restrictions in getting animals to market.

Brendan Golden, livestock chairman at the Irish Farmers’ Association, said the scheme was one of the few positives for the beef sector at the moment.

“It’s a very nervous time for beef farmers and they are under fierce pressure economically, but the feedback we’ve got from our members about the scheme has been very positive and we expect to see a lot of applications being made.”

He added that it was crucial that money flowed to farmers from the scheme as quickly as possible and that the full €50 million was spent.

“We are on tenterhooks in regard to Covid at the moment because we’re coming into the time of year when the weather could break and that means bigger numbers going to the mart and the factories. There are huge concerns still on whether factories are able to manage if Covid impacts on them again,” Mr Golden said.

“We also don’t expect to see food services coming back in the next few months either, and while sales are up in supermarkets, the price farmers get for that isn’t anywhere near as good,” he added.

Mr Golden’s comments come as a document published by the Department of Business last week projected a loss of €700 million-€1.6 billion for the primary agriculture sector from Covid-19, with beef farming expected to be the most affected. The beef sector is also at a higher risk that most other agrifood industries from a no-deal Brexit due to the high level of exports to Britain.

The Beef Finisher Payment scheme is a one-off, exchequer-funded grant aid programme that has been granted approval by the commission under the Covid-19 State Aid Temporary Framework, which was expanded earlier this year specifically to boost support for businesses impacted by the coronavirus outbreak.

Details of the scheme were announced by then minister for agriculture Dara Calleary earlier this month.

The Department of Agriculture said eligibility for the programme was to be based on the number of cattle sent for slaughter in the period from February 1st to June 12th, subject to a limit of 100 animals per herd. Based on estimates of eligible animals, a rate in the region of €100 per animal will be payable.

Applications for the new scheme opened a week ago and are due to close on September 9th.

10 Karlin Lillington: Why were groundless doubts on vaccine retweeted by believers in fact?