Your Business This Week: all the results, indicators and meetings 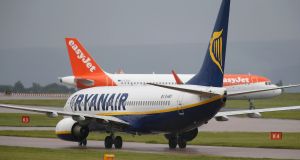 Ryanair Holdings’s agm will be held at CityNorth Hotel, Gormanston, Co Meath, on Thursday. If there is one sure-fire way to create media interest in an agm, it is to ban journalists. Photograph: Andrew Yates/Reuters

Greencoat Renewables releases interim results on Wednesday not long after securing its largest transaction to date with the acquisition of four onshore wind farms from Irish forestry company Coillte.

Davy noted the move could translate into the type of tangible growth promised at the time of its 2017 IPO. The Dublin-listed energy company now has nine assets totalling 299 megawatts.

“Enlarged cash flows should underpin this pay-out further and also lead to an increase in the fund’s net asset value over time,” Davy said.

Goodbody, assuming steady electricity generation and average load factors of 32 per cent, forecasts first half income and gains of €16.9 million.

“Looking ahead, we maintain the view that a strong balance sheet, local knowledge of the asset base and established relationships across the Irish wind farm sector position Greencoat favourably to originate and execute on further deal flow,” it said.

Greencoat’s bid for the Coilte wind farms topped the €125 million target the State body set when it put its stake on the market last March.

If there is one sure-fire way to create media interest in an agm, it is to ban journalists from attending. That is the approach of Ryanair, which has excluded press coverage of its meeting on Thursday following a particularly troublesome year involving a roster fiasco that led to a slew of cancelled flights and a period of learning to work with trade unions.

The decision to block media access is surprising. Aside from being a wholly unorthodox move for any publicly listed company, the airline has arguably built its brand partly on the back of opportunistic media exploitation.

But the sands have shifted in recent times and there is a sense of stress at the airline that may come to the fore on Thursday. Its recent acceptance of trade union representation has led in recent weeks to a number of pilot strikes (most recently in Germany).

Ryanair has said the move to ban media was taken so shareholders could discuss matters freely “without these discussions being distorted for PR purposes”.

But there are other irritations for the company too. Investor adviser Pension & Investment Research Consultancy (Pirc) has recommended shareholders vote against re-electing Michael O’Leary while it joins others, such as ISS and Glass Lewis, in opposing the re-elections of chairman David Bonderman and non-executive director Kyran McLaughlin.