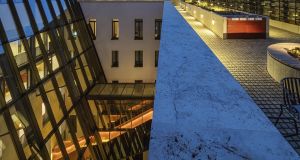 Irish architectural practice O’Donnell and Tuomey has been shortlisted for a prestigious international award for its work on the European University campus in Budapest.

The practice is one of four to make the shortlist for the RIBA International Prize, considered one of the most coveted accolades in architecture.

The award, which will be announced in late November, goes to a building “that exemplifies design excellence, architectural ambition and delivers meaningful social impact.”

The prize is open to any qualified architect in the world, for a building of any size, type or budget.

As part of a major redevelopment of the Central European University, O’Donnell and Tuomey added a new limestone-clad building to a street in the heart of Budapest. The company’s design knits together several historical buildings and courtyards to create an internal sequence of spaces and routes.

The project brings a total of 35,000m² of additional space to the inner-city campus, and consists of a new library, an auditorium, teaching and learning facilities, study rooms, and a café.

The firm’s principals Sheila O’Donnell and John Tuomey said in a statement they were delighted to see the project make the RIBA shortlist.

“This has been a special project for us. An open campus for a liberal-minded university, the project took us on a journey of discovery into the architectural, cultural and urban morphology of Budapest, involving us in sometimes sympathetic, sometimes controversial discussions with the city authorities during the design process,” they said.

“We wanted the building to fit into its context, but to fit in by standing out. Now that it’s built, the project seems to be widely accepted and well understood as belonging to its place, a new part of the old city.”

The university, which is funded by liberal philanthropist and financier George Soros and is frequently ranked as the top educational institution in Hungary, has been under fire from the right-wing nationalist Hungarian government recently over claims it has not been operating within the law. Mr Soros’s Open Society Foundation, which had its regional headquarters in Hungary, recently relocated to Berlin due to pressures put on the organisation by the government of Viktor Orban.

Ms O’Donnell and Mr Tuomey have previously been described as “the godfathers of contemporary Irish architecture.” The firm has previously won a number of prestigious awards including the Royal Gold Medal in 2015, widely considered to be one of the world’s biggest architectural prizes.

Among the projects it has worked on are the Shanghai Grand Opera House, the Lyric Theatre in Belfast, Glucksman Gallery in Cork and the Irish Film Centre.

The other three projects shortlisted for the RIBA International Prize include a new boarding school on the edge of the Amazon in Brazil that provides education and accommodation to the children of rural farm workers that has been designed by Aleph Zero and Rosenbaum. Also on the list is a virtuoso music school in Tokyo by Nikken Sekkei, and a residential tower in Milan by Boeri Studio.