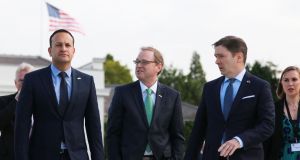 One of US president Donald’s Trump’s top economic advisers has said he expects Ireland will continue to be a “voice of reason” alongside the United States against more left-wing European governments in the coming years.

Speaking at an event at the US ambassador’s residence in the Phoenix Park in Dublin, Kevin Hassett, chairman of the White House council of economic advisers, strongly defended the economic policies of Mr Trump, while also praising the strength of US-Irish relations.

He said economic models carried out by the council he chairs show the responsiveness of the Irish economy to changes in US GDP were the highest of all nations studied.

He strongly rebuked those who deny that the success of the US economy is due to actions taken by the current US president. He suggested that those who don’t believe this were in denial.

Mr Hassett said that, while the ballooning US deficit, which is creeping towards the $1 trillion mark, was an issue that needed to be addressed, Mr Trump had been correct in prioritising “the massive problems we had as a country”.

The economist, who has previously referred to the Republic as a tax haven, said there had been a need to introduce reforms in the US, which have brought its corporate rate down to 21 per cent.

“It’s not Ireland’s fault that the tax law in the US was written by someone who was taking acid. It just made no sense whatsoever,” he said.

He also denied having written the anonymous opinion piece that recently ran in the New York Times, which was critical of Mr Trump. Saying he believed the article was a fraud, Mr Hassett also claimed morale was high in the White House.

Also speaking at a US embassy event, Racing Towards a Trillion: the Future of US-Irish Business, Reece Smyth, chargé d’affaires at the embassy, said the economic relationship between the two countries was stronger than ever.

“Essentially, if you look at Irish economic policy. The whole world has copied it. Ireland has been low tax for a long time and you see corporate rates going down all across the world, and it is good economic policy,” said Mr Smyth.

The volume of trade and investment between the US and Ireland has grown by nearly $100 billion, and it is hoped that it will surpass the $1 trillion mark in the coming years.

“We are roughly at $720 billion, which is a good distance from a trillion … but it is an amazing statistic when you think where both of our countries were 10 years ago,” said Mr Smyth.

Separately, Taoiseach Leo Varadkar told attendees that “Ireland is not a tax haven, we do not wish to be a haven, nor do we wish to be seen as one”.

“We are one of only 23 countries in the world that is fully compliant with the new international best practice as judged by the Global Forum on Transparency and Exchange of Information. And we’ll continue to crack down on avoidance on the years ahead,” he said.