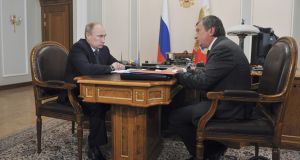 Russian president Vladimir Putin and Rosneft chief executive Igor Sechin. One of the major Russian operations based in Ireland is Rosneft International Finance, a subsidiary of Rosneft, which is the subject of EU and US sanctions. Photograph: Alexei Nikolsky/Reuters

A number of major Russian companies that are subject to the sanctions introduced following Russia’s assault on Ukraine in 2014 have connections with Ireland due to the role it plays in the global funds industry.

The fund operations remain legal despite European Union and US sanctions, although their ability to provide services to their Russia counterparts may have been hit by the introduction of sanctions.

Some of the Russian companies concerned are very close to the Kremlin and the Russian president Vladimir Putin.

The Irish companies tend to have few if any employees despite the enormous transactions they are involved with, and usually pay very little in tax.

However, they contribute to the Irish economy by way of the fees paid for the provision of professional services.

A recent study from Trinity College Dublin estimated that 125 Russian-linked companies have raised €103 billion through Irish funds operations since 2007.

One of the major operations based here is that of Rosneft International Finance. Based in the East Point Business Park, Dublin 3, it is a subsidiary of the massive Rosneft oil company, which is itself the subject of the EU and US sanctions.

Rosneft chief executive Igor Sechin is considered one of Mr Putin’s closest allies and is on the US sanctions list.

Rosneft’s assets include assets that used to belong to Yukos, the since broken-up oil and gas conglomerate whose former owner, Mikhail Khodorkovsky, was at one stage Russia’s richest oligarch. He fell foul of Mr Putin’s regime and was jailed for a number of years before being released after lobbying by the German government.

Rosneft’s Irish arm initiated a $10 billion loan-note programme in December 2012 but only $3 billion of that has since been issued as loans. The latest accounts for the company state that the events in Ukraine continue to have a negative impact on the Russian economy, but the sanctions imposed on the company’s parent have not had an impact on its ability to service its debts to the company.

The company is administered by Deutsche International Corporate Services (Ireland), and makes use of AIB and the Bank of Ireland, Arthur Cox solicitors and auditing firm EY. The latest accounts show the company spent $21,059 on administration fees and $20,503 on audit fees in 2016.

An Irish subsidiary of Rosneft International Finance called Trumpet Ltd, with a registered office on Bride Street, Dublin 8, is involved in oil trading and had a turnover in 2015 of $1.93 billion, according to its latest accounts. It had no employees, produced a profit of $6.2 million and paid tax of $1.5 million.

Another Irish company, VEB Finance, with an address at Park Lane, Dublin 1, is associated with a sanctions-hit Russian bank which is said to be used by the Russian government for politically important projects abroad.

Vnesheconombank (VEB), which translates as Bank of Foreign Economic Activity, has featured in US coverage of links between the Kremlin and US president Donald Trump.

Mr Trump’s son-in-law and adviser Jared Kushner met VEB’s chairman in New York in December 2016, after the presidential election but prior to Mr Trump’s inauguration.

Last year, it was reported that the Russian bank was linked to money invested in the Trump International Hotel in Toronto, Canada, by a Russian Canadian developer, Alexander Shhnaider, who was a partner in the development.

The VEB chairman, Sergey Gorkov, who is a graduate of Russia’s secret-service academy, was appointed to his position by Mr Putin.

VEB Finance has issued loans of $8.3 billion to VEB and these loans are listed on the Irish Stock Exchange. The company’s accounts state the sanctions do not prohibit loans to and from Russian banks, but the sanctions by the EU and others may have an effect on the Russian economy and the standing of Russian banks. In this way the loans to VEB may carry an increased risk.

The notes say VEB Finance is a special-purpose vehicle set up to lend money to VEB but is not a subsidiary of VEB.

State-owned Russian banking giant Sberbank, which is also the subject of EU and US sanctions, has an Irish subsidiary, SB Leasing Ireland Ltd, with an address at Grant’s Row, Lower Mount Street, Dublin 2. The company is involved in the purchase and leasing of aircraft, using funds borrowed from Sberbank.

The legal and professional fees paid in 2016 by SB Leasing were $1.6 million, while audit fees were $43,219. One of the company’s directors is James Duggan, a partner in Flynn O’Driscoll solicitors, Grant’s Row, Dublin, which was paid $288,652 for legal services during 2016.

In December 2016, the District Court in Dublin lifted freezing orders in place since 2011 on about €100 million that had been in Dublin-based funds linked to Mr Khodorkovsky. The orders, which were put in place because of money-laundering concerns arising from the Russian charges that led to Mr Khodorkovsky being jailed, were lifted on the application of the businessman after he was released from jail.

The Russia government expressed its disappointment at the time. Mr Khodorkovsky said the money would be used in part to fund his campaign to promote the rule of law in Russia.

The main Irish export to Russia traditionally has been food and agricultural products but these have suffered because of Russia’s response to EU sanctions.

In 2013, when Ireland was considering introducing a law to restrict the travel and banking activities of Russian officials said to be linked to the death of Russia lawyer Sergei Magnitsky, Russia warned there would be consequences.

At the time, Ireland was being urged to introduce the law which has been enacted in the US and in other jurisdictions. While the matter was being debated, the then Russian ambassador to Ireland, Maxim Peshkov, wrote to an Oireachtas committee warning that such a move could affect trade with Russia and also have a “negative influence on the negotiations on the adoption agreement between Russia and Ireland”.

In the event Ireland backed down. It was in the Russian ambassador’s letter that it was first publicly stated by Russia that a ban on Russian children being adopted in the US was introduced by the Moscow government in direct response to the introduction of the Magnitsky Act in the US.