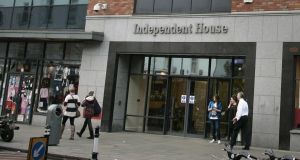 The action by the ODCE against INM marks a serious escalation of its investigation into its affairs. Photograph: Dara Mac Dónail

It is not every day that the Republic’s corporate watchdog confirms its intention to seek the appointment of a High Court inspector to a company. That the company is 29.9 per cent owned by a powerful figure such as Denis O’Brien makes it even more significant.

The action by the Office of the Director of Corporate Enforcement (ODCE) against Independent News & Media (INM) marks a serious escalation of its investigation into its affairs, which was prompted by an extraordinary dispute involving former chairman Leslie Buckley, an associate of O’Brien, and has since been extended to a “potential personal data breach”.

Getting to the bottom of this suspected data breach – who authorised it, who paid for it and who profited from it – is at the heart of this big move from an ODCE that could benefit from a reputational boost of its own.

The list of circumstances outlined in section 748 of the Companies Act 2014 under which the director of corporate enforcement, Ian Drennan, can seek to have all-powerful inspectors appointed does not make for edifying reading.

Probably the most high-profile previous example of inspectors being appointed to an Irish company was the 1998 action against the scandal-ridden National Irish Bank, under what was then section 8 of the Companies Act 1990.

The first similar move since the 2001 establishment of the ODCE, and the most recent example, came in 2008 when Drennan’s predecessor Paul Appleby took that step against DCC, a company involved in everything from fuel distribution to technology sales, amid suggestions of unlawfulness in the conduct of a share sale. No proceedings followed.

That will hardly reassure senior management at INM, which is now led by chief executive Michael Doorly and chairman Murdoch MacLennan. The group, together with its legal advisers McCann Fitzgerald, do at least have three weeks before the ODCE’s scheduled day in court to weigh up its options – or indeed work out if it has any options.

The news is another setback for INM, which reported a 32 per cent drop in profits for 2017, a year in which it issued two profit warnings. In the second of these, one of the cited reasons was higher-than-expected legal costs. Its latest observation that “material costs” may arise is unlikely to be received well by shareholders.

For the company’s employees, the events that have led to this ODCE intervention may be regarded as a rather sad distraction from the business of publishing newspapers. INM has spent a good deal of this decade in a state of flux, and there is little evidence that this will change anytime soon.