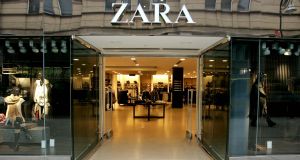 The Zara Store in the New South King Street Shopping complex in Dublin.

The accounts for Za Clothing Ireland Limited show that the local arm of the Spanish owned retail giant recorded turnover of €80.2 million last year, up from €69.2 million in 2015.

Zara operates 9 stores in the Republic in which it employed 364 staff last year. That number is up from 327 the previous year, as are wage and salary costs which jumped by 13.6 per cent to €10.9 million.

One of those stores is located in South King Street, next to Dublin’s Gaiety Theatre. This newspaper reported on Wednesday that the billionaire founder of Zara, Amancio Ortega, was among four bidders shortlisted to buy the complex where H&M and Warehouse are also tenants. It was said that bidding could reach around €165 million.

Zara’s immediate parent company is the Spanish incorporated Inditex, which also owns brands including Pull & Bear, Massimo Dutti and Bershka. An interim dividend of €5 million was paid to Inditex in January of this year and while no final dividend was paid, the €3.8 million profit after tax was transferred to the Irish company’s reserves.

While the company didn’t open any new stores in 2016, its Henry Street, Dublin, branch underwent a refit “in line with the Zara brand image”. In a directors note, the company said further stores will be opened “as soon as suitable opportunities arise”.

1 Irish company to test vaccines on volunteers deliberately infected with Covid-19
2 Should I switch bank now with Ulster Bank at risk of closing?
3 Air travel never going ‘back to way it was’
4 Eir takes on extra staff as ComReg chases it on complaints
5 Why working in an office beats living at work
6 Bank of Ireland sees more than 1,400 staff apply for redundancy
7 Stripe wins more corporate customers, announces Salesforce deal
8 South Dublin land at €19m has scope for up to 500 homes
9 How to bring a hotel group through a pandemic
10 ECB plots Amazon-style website to sell soured Covid loans
Real news has value SUBSCRIBE