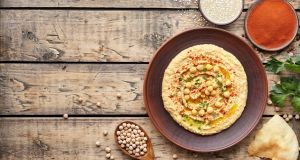 Overall, the Irish grocery market grew by 3.4 per cent year on year to January 27th, as Irish households increasingly turned to healthy options for the new year such as soya or almond milk, and fruit and vegetables, as well as looking to save by buying lower-priced options.

Both Aldi and Lidl performed strongly, with sales at the former up by 10 per cent in the 12 weeks to January 27th, giving it a 10.9 per cent market share. Lidl enjoyed growth of 5.2 per cent, which puts it just behind Aldi, with a share of 10.6 per cent.

Dunnes was the only other retailer to gain market share this period, attracting enough new shoppers to boost its sales by 4 per cent.

“Dunnes continues to engender loyalty among its existing shoppers with its strong premium own label and branded ranges. Crucially, the retailer has won over new shoppers as well, welcoming an extra 20,000 households through its doors compared with last year,” said Douglas Faughnan, consumer insight director at Kantar Worldpanel. It now has a market share of 23.1 per cent, up from 23 per cent in January 2018.

Elsewhere, while market share may have dipped at both Tesco (22.1 per cent) and SuperValu (21.6 per cent) both grocers saw a lift of between 1.3-1.5 per cent to their sales during the period.

While families were willing to splurge in the run-up to Christmas, January saw them cut back, and the survey shows that the average household spent €120 less on groceries during the four weeks to January 27th than in December, as they cut back on more expensive branded and premium products.

The data also points to a correlation between new year resolutions and healthy eating, with January sales of fruit and vegetables up €7 million year on year. And, with the rising popularity of “Veganuary”, which sees some people go vegan for the month of January, sales of plant-based milks were 40 per cent higher than they were at the same time in 2018.

When it came to “Dry January” however, sales of alcohol did not bottom out. Indeed the data shows that more than a third of Irish households bought either beer, cider or wine in January.

“Dry January may have dominated headlines and social media feeds but not everyone abstained – more than a third of Irish households bought either beer, cider or wine in January. Wine proved to be the most popular – 25 per cent of shoppers took home at least one bottle during the past four weeks,” said Mr Faughnan.