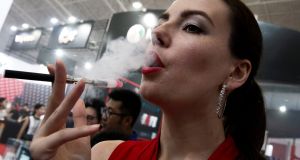 The Republic is Juul’s 10th territory. It sells in the US, Canada, Britain and several other European Union countries, along with Russia and Israel. Photograph: Rolex Dela Pena/EPA

US e-cigarette maker Juul Labs is targeting the Republic’s 830,000 smokers following its launch here on Tuesday.

Juul, 35 per cent owned by Marlboro parent Altria, is the leading US manufacturer of vapes, less harmful cigarette replacements whose users inhale vapour containing nicotine rather than smoke.

The company hopes to convert the Republic’s estimated 830,000 adult smokers from tobacco to its products, according to Grant Winterton, its Europe, Middle East and Africa president.

Gareth Smyth, Juul’s general manager in Ireland, indicated that the company would recruit others. “We are in discussions with retailers in order to expand that,” he said.

Juul has met controversy in the US, where it has been accused of luring teenagers to vaping, which it denies. Mr Winterton stressed yesterday that it targets “adult smokers only”.

Mr Smyth explained that the company demands that retailers sell its products only to those over 18 and wants them to seek identification from any customer who looks under 25. It trains stockists in implementing this.

“We verify that in stores through mystery audits,” he said. Mr Smyth added that Juul dropped any retailer found not to be implementing this practice three times in a row.

Juul packaging carries warnings and it does not advertise on social media. However, both Mr Winterton and Mr Smyth argued that the Republic needs new laws that ban selling vapes to young people.

“It is still not illegal to supply under 18s with e-cigarettes in Ireland,” Mr Smyth pointed out.

British, US, German and other authorities say vaping is far less harmful than smoking, but the Republic’s Health Service Executive has so far remained neutral on the issue.

Most of the damage done by smoking stems from the fact that burning tobacco produces hundreds of harmful chemicals that are inhaled in the smoke. Vaping avoids this.

The Republic is Juul’s 10th territory. It sells in the US, Canada, Britain and several other European Union countries, along with Russia and Israel.

Adam Bowen, chief technology officer, and James Monsees, chief product officer, founded Juul. It only began selling its e-cigarette commercially four years ago and is said to have more than half the US market. In 2018, Altria paid $12.8 billion for a 35 per cent stake in the business, valuing it at $38 billion.