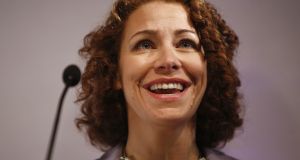 The memo accused Sacha Romanovitch of mismanaging the firm, of failing to focus on profitability and of pursuing a “socialist agenda”. Photograph: Bloomberg

The UK data protection watchdog is scrutinising Grant Thornton over an anonymous memo sent to the media which contained the confidential performance review of the accounting firm’s chief executive.

The memo, which was sent to the Financial Times and other media last month, accused Sacha Romanovitch of mismanaging the firm, of failing to focus on profitability and of pursuing a “socialist agenda”.

The memo stated that the performance review, which contained mostly positive feedback from senior colleagues at Grant Thornton, was included to demonstrate there was “no challenge” within the senior ranks of the firm on strategy or leadership.

Grant Thornton said last month that it would investigate the source of the leak because it breached its own data protection rules.

The UK Information Commissioner’s Office said on Tuesday that it was aware of “an incident” at Grant Thornton and said it was “making enquiries” into the matter.

Grant Thornton declined to comment on the investigation, which is ongoing, or the ICO’s involvement.

The ICO’s enquiry comes at a difficult time for the firm, which this week confirmed Ms Romanovitch will step down as chief executive and leave before the end of the year.

Since taking over in 2015 she has encouraged Grant Thornton to focus on its “social purpose”; encouraged the firm to speak out on issues including mental health at work and social mobility; capped her own pay; and adopted a new bonus system that meant all employees are entitled to a share of its profits, rather than just partners.

By contrast average pay per partner at Grant Thornton has fallen 5 per cent since 2014 to £365,000 in the financial year ending June 2017. The firm will release its latest results next month, although insiders expect profits will be flat at best.

Ms Romanovitch declined to provide comment on her departure other than in a statement on Monday which said she was “proud” of what the firm had achieved recently and of it “breaking the mould in so many ways”.

She told the FT last month that a “small cadre” of partners opposed her strategy, which was designed to pay off in the long term. “If profits get unhinged from purpose it might not hurt you now, but it will come back and bite you on the bum,” she said.

News of the 50-year-old’s departure has been met with dismay from colleagues and competitors within the profession, where she cut a striking figure as the only female chief executive of a major accounting firm.

The head of a rival firm, speaking privately, said that her departure would “reflect badly on the inclusiveness of the profession”.

A senior partner at a rival firm added: “She is a really nice person and it’s not just that she means well - she does well as well. She did some really progressive stuff that people can laugh at or smirk and say ‘it’s socialist’ - but I thought it was good.”

Grant Thornton’s 200 UK partners were contacted on Monday about the election contest to replace Ms Romanovitch, which involves partners putting themselves for the role before they are whittled down by an external analytics company and an internal partner oversight board.

The process is expected to be fraught with tension at a time when the firm is attempting to identify the source of the mutinous memo.

The rival partner said the election process would be an “absolute nightmare” in this environment, adding: “There will be a witch hunt trying to work out who the guilty people are and there will be a rush to show loyalty. We will have to wait and see who is left standing once the smoke has cleared, rather than lying in a bloody heap on the floor.” – Copyright The Financial Times Limited 2018