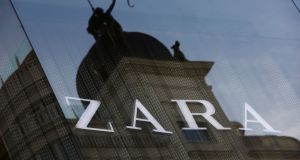 Zara owner Inditex said on Wednesday its autumn clothing collections had been well received and forecast a second-half sales rise of up to 6 per cent and improved profitability, despite a strong euro.

The world’s biggest clothing retailer, which is controlled by Europe’s richest man, Amancio Ortega, said customers had welcomed its latest ranges, featuring items such as printed dresses with embroidery and corduroy coats. Despite strength in the euro against its key currencies, Inditex said net profit was €1.41 billion, in line with analyst forecasts, on sales for the six months to end-July of €12 billion ($14 billion), up 3 per cent year on year. Inditex makes most of its clothes in the euro zone to respond quickly to fashion trends, but generates more than half of its sales in countries outside the currency bloc.

Some currencies, such as the Russian rouble and the Turkish lira, have weakened significantly against the euro over the past year. “Foreign currency effects are very much against Inditex at the moment,” said Anne Critchlow of Société Générale, which rates the stock a “buy”.

Inditex, which owns upmarket label Massimo Dutti and underwear label Oysho, said its first-half gross margin had risen 4 per cent on the year and estimated this measure of profitability would expand by some 50 basis points during the second half of the year.

Shares in Inditex were up as investors responded positively to the upbeat second-half forecasts on sales growth and profit margin. “Management expects a growth in comparable sales of between 4 and 6 percent in the second half of 2018,” it said in a statement. It did not give its customary update on trading for the first six weeks of the new quarter.

Analysts expect 2018 to be the sixth consecutive year of margin decline at the operating level due to currency effects. Some analysts have said Inditex is cutting prices to remain competitive as others adapt its “fast fashion” model, where catwalk looks are shipped to shop rails in a matter of weeks. Fast-growing new entrants such as Britain’s Boohoo.com, unburdened by large store estates, are bringing production much closer to distribution and continuously refreshing merchandise.

Inditex stock has fallen 12 per cent in the year to date and took a tumble in August, when Morgan Stanley cut its price target and gave it an “underweight” rating for the first time in the investment bank’s 17 years of covering the stock. – Reuters