Christmas season unlikely to be festive for British retail sector 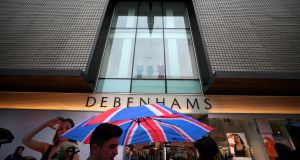 Debenhams on Oxford Street: the retailer’s board was forced to rush out a statement to reassure investors. Photograph: Hannah McKay

It’s been a bleak summer for Britain’s retailers, with the collapse of Poundworld in June, House of Fraser in August and a string of store closures and job cutbacks by other household name chains.

As the first Christmas products start to appear on the shelves, it’s already clear that the crucial autumn/winter season is shaping up to be bleaker still.

The City believes it already knows the next casualty – Debenhams. As shares in the department stores group crashed on Monday amid talk of a major restructuring, the Debenhams board was forced to rush out a statement to reassure investors.

Profits this year will be within analysts’ expectations, the group said, and it was continuing to work with its advisers on longer-term actions including strengthening its balance sheet and reviewing non-core assets.

The City remained unconvinced, however, prompting Debenhams chairman Ian Cheshire to complain bitterly about the “circus” that has surrounded the retailer in recent days.

“It’s like having a bunch of nosey neighbours watching your house,” he said. “Somebody sees somebody in a suit going into a room, the second person concludes it’s a doctor, the third person concludes it’s an undertaker and by the time you get to the end of the day, you’ve got cause of death and everyone’s looking forward to the funeral.”

Debenhams, which admits its plans will involve store closures, is one of the most shorted stocks on the London market. Its shares crashed by 17 per cent at one stage on Monday, to just 10p, and the business is now valued at little more than £140 million.

If the group were to go under, it would have a huge impact on the high street: with 165 stores, it is more than double the size of House of Fraser, currently being picked over by Sports Direct’s Mike Ashley.

Ashley holds a near-30 per cent stake in Debenhams and is thought to want to merge the chain with the House of Fraser stores he bought out of administration last month.

If the retail billionaire does make a move on the embattled British department stores chain, it will mark a significant step-up of his interests in Ireland, where Debenhams has a dozen stores. Ashley already owns Heatons in the Republic and has rebranded a number of those stores to Sports Direct. He’s also planning a raft of “new generation”, large format Sports Direct outlets in Ireland.

The City would dearly love to know what Ashley’s plans for Debenhams are – as would the Debenhams board, no doubt. Sports Direct is holding its annual meeting on Wednesday but the chances of any immediate answers have been scuppered by Ashley’s decision not to attend.

It’s unusual for a chief executive, even one as controversial as Ashley, not to turn up for an agm, particularly when he’s also the largest shareholder. The reason given was the “overriding demands for his time”.

The meeting is being held in central London this year, rather than Sports Direct’s Derbyshire headquarters, which should guarantee enough attendees to mount the now traditional protests against the group’s corporate governance failings, whether or not Ashley is in attendance.

Meanwhile, the grim state of the retail sector will be underlined on Thursday when John Lewis Partnership, the department stores to Waitrose supermarket group, announces its first-half results.

The retailer has already warned its figures will not make pretty reading. Hit by what its chairman Sir Charlie Mayfield says are “unprecedented levels” of price promotions on the high street, it expects profits to have slumped to virtually zero.

Price promotions hurt all retailers but they have a disproportionate effect on John Lewis, which is famous for its “never knowingly undersold” motto. This means that, whenever a high street rival cuts its prices, John Lewis pledges to match the reduction.

In a newspaper article earlier this week, Mayfield wrote about the growing calls for “something to be done” to “save the high street” – specifically, a more level playing field with online retailers.

Perhaps surprisingly, given the damage online retailers are doing to their bricks-and-mortar counterparts, the John Lewis boss is firmly against a so-called “Amazon tax” but says instead that retailers “must first look within their own businesses for the answers to the challenges they face”.

In a market like this, he said, “retreat is not a winning strategy”. But retreat is what we’ll see, if not from John Lewis, then from its rivals. The festive season is likely to be anything but for the retail sector.