Primark partnering with Unicef to fund education in Cambodia 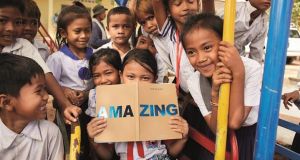 Children from Thnout Khpous Primary School in Phnom Penh, Cambodia, who are involved in the Primark-funded education programme

Primark has agreed a three-year partnership with child-focused humanitarian organisation Unicef that will see it contribute to Unicef’s work in education and emergency response.

The fashion retailer, which is owned by Associated British Foods and trades in the Republic as Penneys, has committed $4.5 million to fund an education programme designed to help vulnerable children attend and stay in school in Cambodia.

The retailer has also committed $1.5 million to Unicef’s worldwide emergency response operations. In 2017 the UN organisation responded to 227 humanitarian situations in 102 countries.

Primark was one of the fashion retailers with suppliers working out of the eight-storey Rana Plaza building in Bangladesh that collapsed in 2013, killing 1,134 people. It subsequently paid into a victims’ compensation fund that was set up after the disaster, which attracted international condemnation.