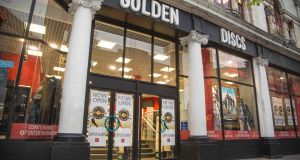 Golden Discs has reported a profit of €173,704 for the year 2017 and signalled that it expects vinyl sales will be at their highest this year since the 1980s.

The profits compare favourably with the sum reported for the 18-month accounting period to the end of 2016, which came in at just under €173,000.

Despite the growing popularity of music streaming services, the Irish entertainment retailer’s revenues of €12.1 million for 2017 held up in line with the near €18 million figure for the previous 18 months.

The performance was helped by the opening of new stores in Limerick and Wexford as well as The Square in Tallaght and Dublin’s Henry Street during the period.

A 50 per cent increase in vinyl sales amid an ongoing “vinyl renaissance” was also credited with boosting profits, with Ed Sheeran’s Divide the top seller at the chain.

“There’s no denying the convenience of streaming services, but consumers want something more tangible and we anticipate this year’s sales being our biggest since the 1980s.”

Mr Fitzgerald said there was “growing acknowledgment” that compressed digital music files were often of lesser sound quality. “Our experience is that super-fans are increasingly turning to physical formats for this reason.”

Golden Discs, which has traded since 1962, expects to announce two new store openings this summer with the possibility of further stores later in the year. It currently has 16 standalone stores as well as concessions in Tesco.

A “strong” release slate in the fourth quarter includes the DVDs for Mamma Mia! Here We Go Again and The Incredibles 2, it said.