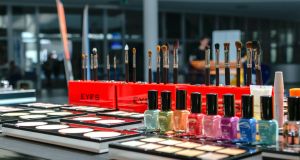 The Swarbrigg family posted a note to Inglot’s Instagram page last month announcing the closure of its stores “due to the impact of Covid-19 and the immense challenges facing the retail sector”.

The Swarbrigg family behind the Inglot make-up brand in Ireland and Britain is putting its main Irish holding company into liquidation, having shut its network of more than 20 standalone stores last month due to the impact of coronavirus restrictions.

Westmeath-based businesswoman Geraldine Swarbrigg and her children, Peter and Jane Swarbrigg, plan to continue Inglot as an online and wholesale business. The brand, which is promoted by reality television star Maura Higgins, is popular with social media-savvy younger customers.

Creditors of the main holding company, Inglot Cosmetics Unlimited, will hold a meeting later this month at the Johnstown Estate in Meath to appoint a liquidator following a decision last week by the company’s board of directors, chaired by Geraldine Swarbrigg, who previously ran the Irish operations of shoes brand Aldo and fashion group Vera Moda.

The family posted a note to Inglot’s Instagram page last month announcing the closure of its stores “due to the impact of Covid-19 and the immense challenges facing the retail sector”.

Three months before the announcement, at the height of lockdown, another Swarbrigg family company, Arvagh Asset Holdings, took a charge over all of the assets of Inglot Cosmetics. Arvagh is majority-controlled by Ms Swarbrigg, with her children Jane and Peter each owning just under 20 per cent.

The unlimited company that is going into liquidation is controlled via an offshore entity owned by the family, Hartford Limited Partnership, in the tax haven of Jersey.

Filings from 2017 suggest the family valued the business at more than €11 million at that stage.

Control of the family’s successful online venture appears to have been shifted in recent weeks to a new Swarbrigg company, Sheever Cosmetics, registered to their Westmeath base. The website for Inglot.ie is still registered to the company that is going into liquidation, but the privacy statement on the website now names the data controller as Sheever.

Ms Swarbrigg, who also previously brought the Jack & Jones clothing brand to Ireland, struck a deal during the last financial crisis with the Polish chemist who founded the brand Wojciech Inglot, for its rights in Ireland. She opened her first store here in Liffey Valley in 2009, before also taking on the UK franchise in 2017.

In recent years, as well as online, it has focused on expanding via partnership deals with bigger retailers, such as Next.

Retail sources said the shuttered standalone stores, which employed close to 300 staff, became obsolete due to social distancing rules. They were used primarily to promote the brand with close contact personal application of the make-up to customers by sales assistants.

The family confirmed that the brand, which has a huge Instagram following among young women, will continue online and in wholesale. But they did not respond to requests for further comment on their future plans for the UK or the implications of the decision for the Next partnership deal.