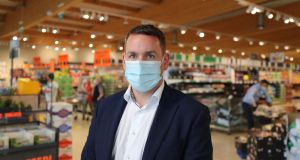 Lidl Ireland’s sales grew by between 25 and 30 per cent during lockdown, according to the company’s chief executive JP Scally. Photograph: Nick Bradshaw

Lidl’s turnover in Ireland is now “in excess” of €2 billion, according to the company’s chief executive JP Scally, as the German supermarket aims to expand further during the upcoming recession. The company is also examining the possibility of opening up post offices in several of its stores.

Lidl has more than 6,000 staff and 202 stores in Ireland, including almost 40 outlets in the North. It plans to open another 11 stores by the end of next year, and will rebuild or extend a further dozen existing outlets over the same period. It is also spending €75 million on a new distribution hub in Mullingar, which will be operational by the start of 2022.

Like most operators in the cut-throat Irish grocery market, Lidl does not file public accounts. Mr Scally confirmed in an interview with The Irish Times that Lidl’s sales on the island now exceed €2 billion annually, but he declined to discuss its profitability or go into more detail on its finances.

“When you do the maths, you can see our turnover is in excess of that number. But we’re a private company and I won’t go into any more specifics. The Kantar figures are never a million miles away,” he said.

The latest Kantar Worldpanel grocery sector report for the 12 weeks to the middle of July suggest sales in the Republic across all grocers rose by 23.2 per cent or €577.7 million. This implies the industry’s total sales for the period were €3.06 billion.

Kantar attributed Lidl with a 12.7 per cent share of the market, or sales for the 12 weeks of about €390 million, or an average of €32.5 million per week in the Republic. Add in the sales from its stores in the North, and it is clear that Lidl could have easily breached the €2 billion barrier.

Mr Scally said Lidl’s sales grew by between 25 and 30 per cent during lockdown, as its customers hunkered down to eat and drink at home instead of going out. He expects to grow the discounter’s share further during the impending recession.

The company is also exploring opening post offices in some of its outlets. An Post has already opened one post office at Lidl in Castleknock in north Dublin.

“There is the potential for more. At the moment we discuss it with An Post on a case by case basis. They have locations they are interested in and so do we,” said Mr Scally.

An Post is also rolling out the installation of parcel lockers at several Lidl stores.

Read the full interview with JP Scally: Lidl looks to cash in on price sensitive consumers as recession looms