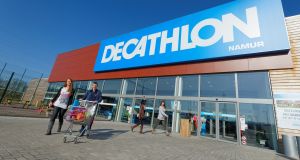 Decathlon, known as “the Ikea of sports retailing”, has 1,350 stores across more than 40 countries and a multi-billion euro annual turnover

After a couple of false starts, the French sports retail powerhouse Decathlon is set to explode out of the starting blocks in Ireland.

The family-owned company is readying the launch of its first Irish store, with nine planned for Dublin, Cork and Galway in the coming years, employing more than 500 staff.

Founded in 1976 and recently voted France’s best-loved brand, the company looked at Ireland a number of years ago, and almost made a move in 2008 before backing away as the financial crisis broke.

Now, it has established its first Irish office (in Sandyford), has a dedicated Irish ecommerce website, and is close to signing for its first store here, with a view to a 2019 opening.

Known by some as the “Ikea of sports retailing”, Decathlon has 1,350 stores across more than 40 countries and a multi-billion euro annual turnover. Ireland is one of the few European countries where it does not have a high street presence.

Last October, the company started delivering directly to Ireland, and it aims to ship 100,000 items here this year to some 50,000 users. It also has plans for a strong retail presence.

According to Decathlon Ireland CEO Bastien Grandgeorge, who moved to Dublin last August from Singapore, where he led Decathlon’s launch, the company is close to negotiating a deal for a 2,000-5,000sq m store on the outskirts of Dublin.

Once this is up and running, it will then look to open in Galway and Cork. A further two stores may then follow in Dublin, as well as another three around the country.

“We will take the time to find the perfect place to fit our concept,” Mr Grandgeorge said, noting that while space in Dundrum Town Centre was suggested, the company was looking for a much larger space.

“It’s hard to find commercial places, but we’re not in a rush, and if we have to open in 2021 it’s not a problem. We’re here to stay for the long term,” he said, adding that the company’s concept, of delivering quality at low prices, also requires low rents.

Decathlon currently has five employees in Ireland, is recruiting for sports aficionados, and by the end of 2018, expects to have about 70 staff here.

Irish consumers can already shop across the company’s 62 sports-specific brands online, and visitors to the continent may already be familiar with the likes of Kipsta, Tribord, Artengo and Quechua.

Mr Grandgeorge said a medium-term goal for the company is to develop its own brand for Gaelic sports.

“We don’t believe there’s a small market, only a market to be developed,” he said.

Decathlon will distinguish itself from incumbents such as Lifestyle and Sportsdirect by offering only its own brand products for sale in Ireland. According to Mr Grandgeorge, this means it won’t be in a “war” with other retailers on prices.

“We will change the market, we will show it cannot be a luxury to practice sport,” he said, adding that Decathlon had committed to offering prices at 20 per cent less than competitors.

Decathlon designs and manufactures the products itself, which, says the company, allows it to pass all the savings on to the consumer.

“There is no reason to take 50-60 per cent margin just because we are on an island,” he said. Indeed, while prices might be “a little bit” higher than in France, due to higher VAT rates, its range of children’s products would be the cheapest across Europe, due to the zero VAT rate on children’s clothes.

So far, Decathlon has received a warm embrace from Irish sports enthusiasts. “The Irish market is crazy,” said Mr Grandgeorge, noting that within a few hours of announcing its ecommerce launch last October, it had attracted 500 comments on its Facebook page.