Sports retailer Elverys back in profit as expansion on the cards

Company, which exited examinership in May 2014, sees turnover rise to €74.5m 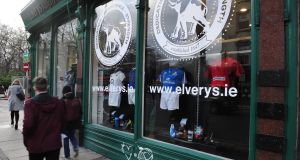 Elverys recorded a €1.14 million pretax profit compared to a €20.1 million loss a year earlier as it opened a number of new retail outlets. Photograph: Aidan Crawley

Irish-owned sports retailer Elverys Intersport, which was bought out of examinership by its management nearly three years ago, is looking to expand its chain of stores after recording a sharp increase in revenues.

The company operates a chain of 56 shops selling branded leisurewear, footwear and sports goods and equipment around Ireland. It also operates a concession agreement in Arnotts department store in Dublin.

Recently-filed accounts for the firm’s parent, Staunton Sports Ltd, show Elverys returned to profitability in 2015, just over a year after exiting the examinership process. Turnover rose to €74.5 million, as against €68.2 million in 2014.

The company recorded a €1.14 million pretax profit compared to a €20.1 million loss a year earlier as it opened a number of new retail outlets and saw an increase in footfall in existing stores, following a revamp.

The Elverys name first appeared in 1847. The company was bought out of examinership by its management in May 2014 with backing from CapNua and AIB after it refinanced its bank debt with an equity investment of €14 million used primarily to pay pre-petition creditors and landlords.

A year later it announced a €1.5 million investment across its retail network and online platform in a move that led to the creation of 40 new roles. It also went on to acquire the landmark Maher’s Sports business in Cork city.

In a note included with the accounts, directors Patrick Rowland and Jason Carey said the company intended to open a number of new stores throughout Ireland.

“The directors expect the company to continue to benefit from the restructuring in the upcoming year and improvement in retail performance will increase turnover and further improve profitability,” the directors said.

Elverys Intersport employed 591 people at the end of 2015 with staff costs totalling €12.5 million.

The company ended the year under review with a net asset position of €3.67 million compared to a deficit position in the prior year.