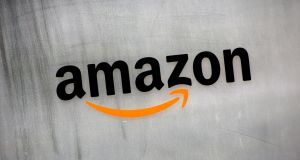 Amazon’s quarterly revenue rose 22.4 per cent, driven by strong sales in the holiday period and a jump in subscriptions for its Prime service.

The world’s biggest online retailer said its net sales rose to $43.74 billion (€40.6 billion)in the fourth quarter, from $35.75 billion a year earlier. Analysts had expected $44.68 billion, according to Thomson Reuters I/B/E/S.

Amazon said last month the 2016 holiday was its best-ever shopping season, when it shipped 50 per cent more items than the prior year for third-party vendors.

1 ‘Darth Vader’ masks developed in Ireland can help meat-plant workers
2 Consumer spending on the rise but people still staying close to home
3 Irish company insolvencies expected to spike near crisis level of 1,700 next year
4 ‘Saudi Arabia is where the opportunities will happen in future’
5 Over 200 Covid-related complaints lodged with financial ombudsman
6 Spare me the city-dweller’s longing for a rural idyll
7 Financial ombudsman warns consumers of attempted scam
8 MSD buys Takeda biologics plant in Dunboyne
9 ‘It’s not about beating the life out of a price for the sake of it’
10 Science of selling crucial to post-Covid recovery
Real news has value SUBSCRIBE