Retailer records sales of €5.9m in the year to the end of February 2016, accounts show 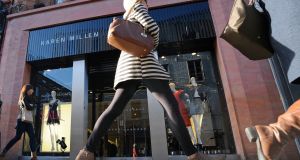 Accounts for Karen Millen Ireland Limited show that it broke even in the year to the end of February 2016. Photograph: Dave Meehan

Fashion chain Karen Millen recorded sales of €5.9 million in its Irish stores in the year to the end of February 2016, down 6 per cent year on year in what the directors said was “a difficult retail environment”.

Accounts for Karen Millen Ireland Limited just filed to the Companies Office show that it broke even for the period, having made a loss of €100,000 in the previous 12 months.

It also has stores in Blanchardstown and Dundrum Shopping Centre in Dublin and an outlet in Kildare Village.

In November, Reuters reported that Kaupthing planned to sell its other retail assets – the women’s fashion chains Warehouse, Oasis and Coast – and was looking at options for Karen Millen.