Nordstrom says dropping her accessories, shoes and clothing is ‘not a political decision’ 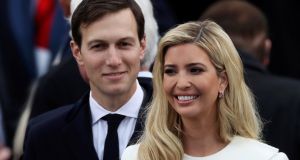 Ivanka Trump, with her husband Jared Kushner: Nordstrom has removed her name from the list of brands available on its website.

US retailer Nordstrom is to stop selling the Ivanka Trump brand, in a major setback for the eponymous fashion label of Donald Trump’s daughter amid pressure to boycott her products.

The Seattle-based department store chain said on Twitter late on Thursday that it had “decided not to buy” Ivanka Trump products for this season, but said it was “not a political decision” but instead “based on the brand’s performance”.

In a statement to US media, Nordstrom said: “We’ve got thousands of brands, more than 2,000 offered on the site alone. Reviewing their merit and making edits is part of the regular rhythm of our business.

“Each year we cut about 10 per cent and refresh our assortment with about the same amount. In this case, based on the brand’s performance we’ve decided not to buy it for this season.”

Nordstrom did not disclose sales figures for the Ivanka Trump brand of clothes, shoes and accessories. But data compiled by Slice Intelligence, the market intelligence firm, showed a 26.9 per cent drop in Nordstrom’s online sales of Ivanka Trump last year, compared with 67.3 per cent online revenue growth in 2015.

The poor performance at Nordstrom, historically Ivanka Trump’s biggest source of online sales, dragged down the brand’s overall online revenues in 2016 at its five largest merchants, according to Slice. Sales on Zappos. com of the Ivanka Trump brand were down 18.2 per cent last year. However, sales rose 22.5 per cent on Amazon and 35 per cent and 38.7 per cent at Bloomingdale’s and Macy’s respectively, during the year.

By Friday, Ivanka Trump had been removed from the list of brands available on Nordstrom’s website. Four styles of the company’s women’s shoes remained for sale on the site, though all of the products were listed at a 40 per cent discount.

Ivanka Trump, the eldest daughter of the US president, said last month that she would take a “formal leave of absence” from the Trump Organisation and her eponymous label when her father took office, and would “no longer be involved with the management or operations of either company”.

ProPublica, a US non-profit news organisation, reported on Thursday that Ms Trump has yet to file her resignation with regulators, and remains listed as a director of Trump businesses in Florida and New York.

Ms Trump, who recently moved to Washington, has no formal role in the Trump White House. Her husband, Jared Kushner, is a senior adviser to the US president.

The Ivanka Trump label could not be reached for comment on Friday morning.

Nordstrom’s decision to stop stocking the Ivanka Trump brand underscores the increasing complicated pressures placed on US companies, especially those looking to stay out of party politics.

Many US consumers have rallied behind the #GrabYourWallet social media campaign, which urges shoppers to protest against the US president’s crude comments about women by boycotting retailers selling Trump brands, including Amazon, Macy’s, Neiman Marcus and Lord & Taylor.

Sharon Coulter, who started the campaign, said on Twitter late on Thursday that she was “dazzled to see this many flexing their consumer power in favor of a more respectful, inclusive US”[sic].

Retailers are not the only companies under pressure to cut ties with the Trump administration.

Uber chief executive Travis Kalanick quit the president’s business advisory council on Thursday after mounting criticism over the president’s immigration order. Mr Kalanick’s decision is expected to put pressure on the other executives on the council, including management from Blackstone, IBM, GE, GM, Disney, Pepsi and Tesla.

Meanwhile, Trump supporters have also taken to boycotting companies that have taken a stance against the newly-inaugurated US president.