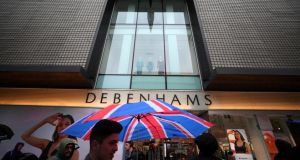 After the market closed, Sports Direct issued a statement saying that it “does not intend to make an offer” for Debenhams. Photograph: Hannah McKay/Reuters

Sports Direct’s annual shareholder meeting ended in confusion on Wednesday after two directors announced they were stepping down less than an hour beforehand, and the company was later forced to deny it was considering a bid for Debenhams.

The departures of chairman Keith Hellawell and senior non-executive director Simon Bentley were announced in a regulatory notice shortly before the meeting began. Both had been listed for re-election to the board.

Mr Bentley later denied telling reporters at the meeting that the board had discussed joining up department store chain House of Fraser, which Sports Direct bought out of administration in August, and Debenhams, where it owns a 29 per cent stake.

“I was asked a general question about whether or not we discuss our strategic investments, and in particular Debenhams, to which I replied in the positive,” he said. “I made no mention of any merger between House of Fraser and Debenhams, nor did I intend my answer to infer that.”

Liam Rowley, Sports Direct’s head of investments, said there had been no change in the company’s position on Debenhams. “They’re having tough times. We’re a major shareholder and we want them to do well.”

Debenhams’ share price rose nearly 9 per cent nonetheless. After the market closed, Sports Direct issued a statement saying that it “does not intend to make an offer” for the company, but it did not explicitly deny that combining the two chains had been discussed.

Mike Ashley, the company’s billionaire founder and chief executive, attended the shareholder meeting but did not speak and left immediately. The company had earlier said that Mr Ashley would not attend because of “overriding demands for his time”.

Mr Hellawell, a former senior police officer who has served as chairman since 2009, has borne the brunt of investor criticism of the company’s corporate governance.

At last year’s annual meeting, he was re-elected by independent shareholders, but shareholder advisers Glass Lewis and ISS had urged investors to vote against his reappointment this year.

Sports Direct declined to say whether Mr Hellawell would have been re-elected this time, based on votes received before the meeting. The official notice of the results showed the resolutions as withdrawn.

Mr Hellawell will be replaced by David Daly, an existing non-executive director who spent most of his career at Nike.

Mr Bentley had previously said he would step down from the board, having served more than the nine-year limit advised by the UK’s corporate governance code.

He said he was proposed for re-election only because the group had yet to appoint anyone qualified to chair the audit committee. A new non-executive with appropriate audit experience would be announced “very soon”, he said.

Nicola Frampton, the head of UK retail at bookmaker William Hill, was appointed to her first non-executive role.

Asked about Sports Direct’s reputational and corporate governance issues, Ms Frampton said she had “come in with eyes wide open” and that some views of the company were “based more on perception than reality”.

Royal London Asset Management, which owns £2.8 million of Sports Direct shares said it hoped that strong governance would be the board’s new top priority. “This includes improving the company’s working relationship with independent shareholders and addressing concerns about working conditions and contracts in the company’s warehouses and stores.”

The group cited “poor governance” and lacklustre responses to shareholder concerns for its recommendation.

It also warned that the deal to buy House of Fraser, which was announced just after the department store went into administration, had drawn attention from regulators.

“Shareholders should be concerned with any type of regulatory investigation involving the company, as such matters could potentially expand in scope and prove to dampen shareholder value,” Glass Lewis said.

ISS, the world’s largest proxy adviser, had also recommended a vote against Mr Hellawell ahead of the meeting.

It said that after large protests from independent shareholders in recent years, his position as chair was not tenable. It also said that a vote against was merited because “ongoing governance and operational failures have not been fully addressed”.

On Wednesday, Mr Hellawell said that “having overseen significant improvements in the working practices and corporate governance of the company, which includes a refresh of the board, now is the right time for me to step aside”. – Copyright The Financial Times Limited 2018

Draper Esprit has led a $20m investment in Riverlane 10:08
Investor anxiety mounts over prospect of stock market ‘bubble’ 08:20
Boohoo buys Debenhams while ASOS moves for Topshop 08:19
‘Hot market’ sees Sky ramp up film and TV investment in bid to ‘own its future’ 08:00
Shareholders to vote on €718m Applegreen deal 07:46