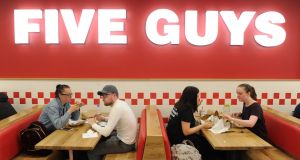 The sons of financier Dermot Desmond want to expand their Five Guys operation in Dublin with a proposed new restaurant in Liffey Valley shopping centre.

Brett, Derry and Ross Desmond own the Irish franchise for the US burger chain, which already operates in Dundrum Town Centre, in Dublin city centre at George’s Street, and in Belfast.

They are also planning to add outlets in Blackrock on the southside and, it is believed, on the northside of Dublin city centre.

It is understood that Liffey Valley, which was bought for more than €600 million two years ago by German public pensions group Bayerische Versorgungskammer, is seeking to add two new restaurants to its roster, one large and one smaller outlet.

Five Guys is prominent among the bidders for the larger Liffey Valley outlet, although it faces opposition from another major restaurant brand that would be new to the Irish market.

It is expected that the shopping centre will finalise deals for the two new restaurants within the next six to eight weeks.

Liffey Valley and its property agents were unavailable for comment, while Five Guys made no response to an emailed request for comment.

The Desmond brothers have in recent weeks established a new company, Five Guys (Liffey Valley), ahead of a final decision being made on the deal. They have said that, ultimately, they want to open 10 Five Guys outlets in Ireland.

The Five Guys brand was founded more than 30 years ago by a family in the state of Virginia in the US, and now operates 1,500 restaurants worldwide. It moved outside the US in 2013, with an outlet in Covent Garden in London.

The brand has something of a cult following, and it is known for its loud in-store music and for storing bags of potatoes in front-of-house areas.

7 ‘I love the place’: US billionaire John Malone on his €300m Irish portfolio

9 Ireland not getting a slice of EU’s €81.4bn Covid payments pie