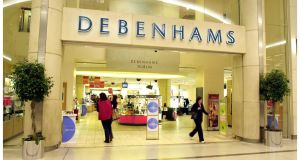 Debenhams has 11 stores in the Republic. Photograph: Alan Betson

Debenhams rushed out a trading statement on Monday to reassure investors after a sharp share price fall triggered by reports it was considering a financial restructuring.

Shares in the UK retailer had fallen by as much as 19 per cent to an all-time low early on Monday over concerns about its plans, which weekend media reports indicated could include a company voluntary arrangement (CVA).

Debenhams, which has 11 stores in the Republic, responded with a statement that it expected pre-tax profit before exceptional items to be within current forecasts, giving the shares a lift. They still closed down 10 per cent at 11.50 pence. The company’s 2021 bonds were offered at 70 per cent of face value, down almost five percentage points.

Tony Shiret, analyst at Whitman Howard, said the group’s failure to deny outright the reports “means many people may well be left thinking there is some contingency planning going on”.

Debenhams reports results for the year to September 1st on October 25th. It said it expected pre-exceptional pre-tax profit of about £33 million (€37m), within the current market range of £31 million to £36.5 million, and earnings before interest, tax, depreciation and amortisation of about £157 million.

The company has warned on profits three times since January, while analyst forecasts for profits have halved since the start of the year.

Ian Cheshire, chairman, said that “while people are understandably nervous, nothing has really changed since Friday”. He added that the company “continues to work with its advisers on longer-term options, which include strengthening our balance sheet and reviewing non-core assets”.

Debenhams is thought likely to sell Magasin du Nord, its Danish department store business. The asset could be worth about £200 million – more than the group’s £165 million market value – and accounts for about 9 per cent of annual revenue.

New product launches were being well received despite further deterioration in the trading environment, Debenhams said.

The company’s financial year included the summer months when the UK was affected by an unusually prolonged spell of hot weather that kept shoppers away from high streets.

Mark Williams, the president of retail property association Revo, said the statement showed Debenhams failed to meet the criteria for a CVA “by a country mile”. Companies that propose a CVA must demonstrate to creditors that the alternative is insolvency.

Debenhams also said it expected year-end net debt to be about £320 million. It has £520 million of borrowing facilities in total, and in August renegotiated a key covenant on its bank loans.

This contrasts with other UK-listed retailers such as Carpetright and Mothercare, which earlier this year were forced to take out expensive loans from big shareholders before implementing CVAs. – Copyright The Financial Times Limited 2018