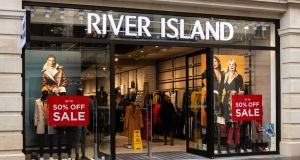 British chancellor of the exchequer Rishi Sunak has signalled a 12-month rates suspension for all retail and leisure businesses with a rateable value of less than £51,000.

A group comprising most big British retailers in Ireland has written to the Government requesting it follow the UK government in suspending commercial rates for shops and other businesses.

The retailers warn that if “immediate action” is not taken on the issue, “there is likely to be a considerably smaller sector left at the end of the pandemic”.

The Retailers Rates Action Group, which includes operators such as River Island, Iceland and B&Q, laid out its request in a letter to Local Government Eoghan Murphy. Commercial rates are paid to local authorities who are, ultimately, overseen by his department.

The group, with more than 50 members, has asked for a 12-month hiatus on commercial-rates payments for all shops, leisure and hospitality businesses, including their warehouses and distribution centres. They want it to be backdated to the beginning of the March 13th lockdown period. This would require a refund for some businesses that made six-monthly payments in January.

The group is also seeking a further 50 per cent reduction in commercial rates for six months following the requested 12-month suspension period, to allow businesses “restore their financial security”.

“Clearly the threat of coronavirus needs urgent and decisive action to be taken to support the retail sector in these unprecedented times,” stated the letter, which was sent to the Minister on the headed paper of group member Primark.

“Without the support requested above in this letter, there is no doubt that a lot of retail businesses will be lost.”

Earlier this week, however, Dublin City Council chief executive Owen Keegan said the city could not afford a rates suspension.

Retailers Rates Action Group, which also includes companies such as Monsoon Vue Cinemas and JD Sports, was founded in the UK 18 months ago to pressure the government there to reduce rates. In Ireland, it includes Arnotts and Brown Thomas which are owned by UK retailer Selfridges.

In his budget last week British chancellor of the exchequer Rishi Sunak announced a 12-month rates suspension for all retail and leisure businesses with a rateable value of less than £51,000 (€55,000).

On St Patrick’s Day, the retail group wrote to him requesting an extension of the measure to save jobs in bigger employers. Later the same day, Mr Sunak announced that the rates suspension would be extended to all retail and hospitality premises.

Biopharma company founder named EY World Entrepreneur of the Year for 2020 20:20
Penneys will not reopen on Monday despite expected changes to lockdown rules 19:42
State’s tourism taskforce wants changes to school holidays to boost ‘staycations’ 19:22
Pandemic payment may be tapered based on previous earnings 18:42
Tesla to rework Berlin factory plans to allay environmental fears 18:00

1 Penneys will not reopen on Monday despite expected changes to lockdown rules
2 Angela Merkel sweeps in to save the euro zone
3 Irish company MyBio to sell 10-minute Covid-19 antibody test
4 In six months we will be in the grip of a 1980s-style recession
5 Don’t expect a bonanza for Ireland from the EU’s €750bn recovery cash
6 State’s tourism taskforce wants changes to school holidays to boost ‘staycations’
7 Pandemic payment may be tapered based on previous earnings
8 A million beers await drinkers as Europe's bars reopen
9 Ryanair to process all Covid-19 refunds within 10 weeks, Michael O’Leary says
10 Chartered Land moves closer to approval for Dublin’s tallest tower
Real news has value SUBSCRIBE