Six staff at Trinity College earned over €300,000 each last year

University calls for ‘significant additional funding’ from Government despite reporting €5.7m surplus in 2019 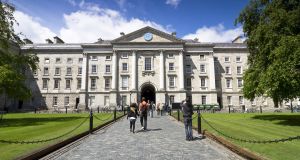 TCD last year spent €2.83 million on recruitment, €1.3 million on hospitality and entertainment and €6.8 million on travel and subsistence. Photograph: iStock

Six members of staff at Trinity College Dublin (TCD) earned more than €300,000 each last year. No staff members earned above that limit the previous year.

According to the university’s annual accounts, the top earner at the college received between €360,000 and €370,000 in 2019. In common with other universities that have medical schools attached, the top earners would be academic medical consultants and their pay is set by the HSE.

No breakdown between medical and non-medical high earners is provided in the accounts but TCD pay scales show that the top pay for professors outside the medical field rises to a ceiling of €151,477.

A spokesman for TCD said on Friday: “Salaries paid in all of the main universities are governed by strict State rules. We are unable to provide a breakdown at short notice.”

The college’s key management team last year shared €2.3 million in pay as the overall staff costs increased by 3 per cent from €263 million to €271.46 million.

Trinity’s chief financial officer Peter Reynolds said the increase in staff costs was driven by an increase in numbers employed and pay restoration agreed by the State under the Lansdowne Pay Agreement.

The numbers of staff employed by the university increased by 112 to 4,549.

Trinity university and its subsidiaries recorded a surplus of €5.7 million for the year, with earnings before interest tax depreciation and amortisation (Ebitda) in the 12 months to the end of September last totalling €13.8 million.

Despite the surplus, Mr Reynolds said in his report that “significant additional funding will be required from Government to address the shortfall in public funding per student”. He said funding last year was only 40 per cent of 2008 levels and and an increase would also be necessary to meet anticipated growth in demographic and participation rates.

“Exchequer income has declined from 70 per cent of the university’s total income in 2008 to 39 per cent in 2019 and the financial outlook for the university will continue to remain uncertain unless the Government commits to long-term funding or lifts the cap on undergraduate student fees.”

A breakdown of TCD’s income shows that last year it generated €12.8 million from its accommodation and €18.33 million from ‘library income’.

The university spent €2.83 million on recruitment, €1.3 million on hospitality and entertainment and €6.8 million on travel and subsistence.

A note attached to the accounts states that the impact of Covid-19 on the university in the coming year “is difficult to predict”. At the end of September, the college’s total reserves stood at €817.82 million that included cash of €181.69 million.

1 How much state pension will I get next year?
2 Am I crazy to consider switching to an Ulster Bank mortgage?
3 Up or down – how much is your Local Property Tax this year?
4 Fall in mortgage drawdowns, Brexit threat to services, and advice on your pension
5 Mortgage drawdowns fall by almost a third
6 Oxford Covid vaccine trials offer hope for elderly
7 Brexit to curb services trade with UK, accountants group warns
8 How long can Government afford to keep State pension age at 66?
9 Tesco takes to the skies with home delivery by drone
10 Stocktake: Tesla profitable, but still expensive
Real news has value SUBSCRIBE