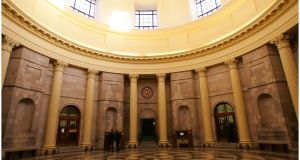 In the High Court, Mr Justice David Barniville granted interim injunctions preventing the agents terminating the agency agreements at issue and requiring them to continue to operate the business as agreed between the parties.

A logistics and parcel delivery firm has secured temporary High Court injunctions against two agents over allegedly seeking to discontinue their services arising from the Covid-19 emergency.

Interlink Ireland Ltd claims both agents have said they would discontinue their service with immediate effect from March 31st or, alternatively, would continue it if they were paid a substantial sum to do so.

It claims the agents are using the virus outbreak for commercial reasons.

On Wednesday, Interlink Ireland Ltd, which trades under the name DPD, secured orders on an ex-parte basis (one side only represented) preventing the two agents terminating agreements to deliver and collect parcels in the Munster area.

Mr Corcoran is network area operator for DPD for all of Cork and Mr O’Brien is operator for the Limerick and North Tipperary area. Those areas are key areas for DPD, the court was told.

Mr Justice David Barniville was told both agents informed Interlink in recent days, in light of the Covid-19 pandemic, they were no longer in a position to discharge their commitments under the agreements.

Rossa Fanning SC, for Interlink, said no reasons were given to it concerning how Covid-19 has affected their businesses to the point they can no longer to discharge their commitments.

The agency agreement can only be terminated by giving six months’ notice which would allow his client make alternative arrangements, he said.

Since the outbreak, Interlink’s business has “dramatically increased” and, during this busiest time in its history, it is providing important services, including delivery and collection of medicines, medical devices and other vital supplies to people all over Ireland, he said.

There was “an element of blackmail” in those proposals and there is no contractual obligation on Interlink to make such payments, counsel said.

None of more than 30 other Interlink agents have made any complaints about the effects of the pandemic and Interlink believes the defendants are “seeking to take advantage” of the international health emergency “to apply commercial pressure” on it, he said.

With many businesses in lockdown, it would be impossible for Interlink to source new depots and make fresh business arrangements for those areas and any disruption to deliveries there would badly damage Interlink’s reputation, he said.

Interlink, with headquarters in Athlone, Co Westmeath, operates 33 regional depots in Ireland and has been in close contact with all of its agents over the recent days and months in relation to recent events, he said.

The defendants had never informed the company they were having any difficulties or were considering exiting the agreements, counsel said.

Interlink aided the companies in recent years as they expanded the areas they covered and has paid them advances on their March invoices, counsel added.

Mr Justice Barniville granted interim injunctions preventing the agents terminating the agency agreements at issue and requiring them to continue to operate the business as agreed between the parties.

While he had only heard one side of the argument, he was satisfied from the evidence before the court to grant the injunctions, the judge said. He returned the matter to Friday when the defendants can make arguments in relation to the claims.

‘I’ve so many outgoings with family life . . . it puts manners on you’ 05:20
Pilita Clark: A lot of us are losing it in lockdown – but we really shouldn’t 05:00
Developer O’Flynn calls for task force to deal with housing crisis 05:00
State guarantee needed for businesses that require liquidity 04:57
Lobbyists Zoom in to get their message across to Ministers 04:54

1 Pricewatch: Coronavirus has given us four categories of shopper
2 Economies can be restarted if bold and imaginative choices are made
3 Developer O’Flynn calls for task force to deal with housing crisis
4 Consumer spending fall may cut indirect tax revenues by up to €6.7bn
5 Staff at Ray-Ban maker to get sound alert when not socially distancing
6 Huawei asks Samsung and SK Hynix for chip supplies in face of US isolation
7 Lobbyists Zoom in to get their message across to Ministers
8 Pilita Clark: A lot of us are losing it in lockdown – but we really shouldn’t
9 Denis O’Brien forced to lift hood on Digicel in debt restructuring
10 A Smigin of language goes a long way for well-travelled Cork woman
Real news has value SUBSCRIBE