Seismic shift is under way in global retail towards digital 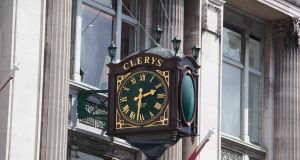 US retail giant Macy’s announced this week that it was closing its shop in Dublin as part of a rationalisation of its store network. That was Dublin, Ohio, rather than our own splendid capital, but it is a signal of the seismic shift that is under way in global retail.

In total, Macy’s is closing 68 stores across the US and “displacing” 3,900 staff in response to consumers switching to purchasing online. Macy’s expects to generate annual savings of $550 million, allowing it to invest $250 million in its digital business.

The venerable retailer isn’t alone in shuttering large numbers of bricks and mortar stores in America.

Kmart and Sears, both owned by Sears Holding, will close 150 stores in the spring across 40 states. Liquidation sales at the affected shops began on Friday.

Should we expect to see a similar trend on this side of the Atlantic?

To a lesser degree, we already have in Ireland. The Clerys department store was closed by new owners Natrium amid much controversy in 2015. Clerys was the victim of a property play and will eventually be replaced, at least in part, by some other retail offerings, but the department store concept operated by Clerys had become old hat.

Even Dunnes Stores, a long-time holdout against online shopping, has fully embraced ecommerce.

In the UK, BHS closed its remaining 22 stores last August after 88 years in business, while grocery giant Tesco called time on 24-hour shopping at 76 supermarkets.

Judging by trading over the Christmas period just passed, the disruption to high street trading could be a permanent feature for years to come.

As highlighted by Retail Ireland, consumers, driven in part by intense promotional activity around the Black Friday and Cyber Monday periods, are now making an increasing proportion of their Christmas purchases earlier in the festive shopping season. And doing so online.

It used to be the case that people did their research online before purchasing items in a shop. Now they are doing their research in-store before going online to find the best price. It’s a trend that will make it difficult to fill all of those empty retail units in towns and villages around the State.