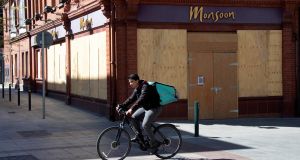 Retailers have urged the Government to accelerate the reopening of the economy by allowing all shops to reopen from June 8th, as long as they have prepared measures to operate under social-distancing measures.

Industry lobby group Retail Excellence told its members on Tuesday that it understood from its contacts with the Department of Business that a full review of all phases of the lockdown would be undertaken on June 1st.

The lobby group told its members it had argued with officials that a delayed reopening of larger shops, which are meant to remain shuttered for weeks after smaller shops can reopen, does not make sense under social-distancing advice.

It also argued against the continued closure of all shopping centre retail outlets, which under the current plan will not reopen until August 10th.

The Retail Excellence web seminar was also addressed by John Moran, a former secretary-general of the Department of Finance, who has become the figurehead of a wide-ranging campaign to get the Government to provide ongoing support to SMEs.

Mr Moran told the meeting that his experience working for government had taught him that while State structures were in place to support the multinational sector, the same could not be said in relation to SMEs.

“We will not get a recovery unless it is SME-led and jobs-driven,” he said, as he highlighted that 1.5 million people were working in SMEs before the crisis hit,

“The SME sector needs a bailout. It needs grant relief and solvency relief. There is no point giving them loans that will stay on their balance sheets as a priority charge because they will never be able to borrow commercially again,” he said.

Mr Moran said that when the coronavirus crisis first hit, the original belief was that it would be a “snowstorm – and one day the snow would just clear and it would be all clear again”.

Now, he says, it is clear that this is not going to happen and the economic crisis precipitated by the onset of the virus will be much deeper and prolonged than initially feared. “It is akin to a national disaster.”

Dalata agrees new debt facility as it recovers from Covid-19 07:58
Donohoe’s new role, House of Ireland shuts, and being indispensable at work 06:30
Getting back to business after the Covid-19 shutdown 05:56
The €1 billion market: retailers who serve tourists face double trouble in a pandemic 05:50
Nominees announced for third Irish Times Business Awards 05:45

1 Donohoe’s new role, House of Ireland shuts, and being indispensable at work
2 ‘Sad day’ for House of Ireland as tourism retailer goes out of business
3 ‘My rent here is so low it’s a joke’
4 Paschal Donohoe’s election as Eurogroup president ‘a great win for Ireland’, says Taoiseach
5 Caveat: The tourism sector deserves to be taken more seriously in this crisis
6 Donohoe’s new role puts State at centre of debate over EU’s future
7 The €1 billion market: retailers who serve tourists face double trouble in a pandemic
8 Gardaí raid Irish office of failed German payments group Wirecard
9 Remote working: How to get ahead in a changed world
10 Water supply problems are not of Irish Water’s making
Real news has value SUBSCRIBE