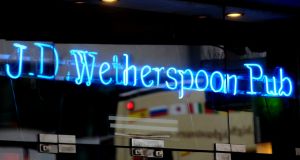 Pub operator J D Wetherspoon on Wednesday posted a 4.7 per cent increase in its like-for-like sales for the second quarter, joining peer Mitchells & Butlers in reporting strong performance during the key holiday season.

While pub operators and restaurant chains have suffered due to steep costs on the back of higher wages and energy bills, Britons have ventured out to Wetherspoon’s outlets for drinks, especially its pink gin, helping cushion other headwinds.

Festive season has also provided some respite to the beaten-down sector, with Mitchells & Butlers also marking a solid update for the period encompassing Christmas and New Year holidays.

Most of the Wetherspoon trading statement was taken up with an attack by Wetherspoons Derry-born founder Tim Martin on corporate governance rules and on industry groups – such as the Confederation of British Industry and the Food and Drink Federation – still warning about the perils of Brexit.

On the financials, Wetherspoon said like-for-like sales in the fiscal year to date climbed 5 per cent and it expects a trading outcome in line with its previous forecast.

The company laid out a plan in December last year to create more than 10,000 jobs over the next four years as it looks to invest about £200 million (€237m) to launch more outlets in Britain and Ireland.

The British pub chain has one pub in Dublin city centre – the Silver Penny on Abbey Street – and is developing a pub and 89-bedroom hotel in the city, which is set to open this year. It recently acquired HQ Bar and Restaurant at the Grand Canal Dock.

It also runs pubs in Dún Laoghaire, Blackrock, Blanchardstown, Swords, Cork and Carlow, and has sites in Waterford and Galway, which are due to be redeveloped.

Wetherspoon said it intends to open another 10-15 outlets and expects to spend nearly £80 million this year on new pubs and extensions. – Rueters

1 Corona beer firm reeling after 8% slide due to coronavirus
2 Life as a Facebook moderator: ‘People are awful. This is what my job has taught me’
3 How well paid do you think you are? Here’s how to work it out
4 Tyrone offsite building firm attracts multimillion investment
5 Coronavirus-induced sell-off wipes €6.7bn off value of shares in Dublin
6 Pharma giant AbbVie warned Government against ‘unfair’ €572m tax bill
7 Ryanair and Aer Lingus monitor impact of coronavirus on travel to Italy
8 Computershare fined €322,500 for multiple breaches of regulations
9 Coronavirus: ‘All bets are off’, says aircraft industry chief
10 Flight attendent seeks High Court injunction against Aer Lingus
Real news has value SUBSCRIBE