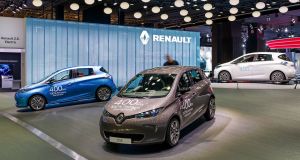 According to accounts recently filed, Renault Ireland Ltd saw growth in both new vehicle sales and spare parts in 2015. The French car giant distributes its eponymous brand along with its budget brand Dacia.

As with 2014, no dividend was paid to the parent company Renault SAS last year. The French car giant took direct control of the brand’s distribution and marketing at the end of 2008. Prior to that it was operated under a franchise agreement with Bill Cullen’s Glencullen Distribution Ltd, who had held the rights since 1986.