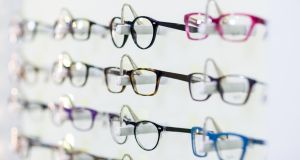 The companies had sought the protection of the court after racking up losses of €4 million. Photograph: iStock

The examiner appointed to Dublin’s largest opticians chain has been granted an extension of 30 days by Judge Jacqueline Linnane to allow him further time to form a scheme aimed at saving the company.

The Circuit Civil Court was told last month that Donal MacNally Opticians and an associated company, Von Opticians, were insolvent and unable to meet their debts.

The companies had sought the protection of the court after racking up losses of €4 million. Judge Linnane appointed chartered accountant Myles Kirby as the examiner tasked with attempting to rescue the companies.

The court had heard that the companies which employ 24 staff and have stores in Clondalkin, Swords, Malahide, Sutton and Navan, ran into trouble due to increased competition and changes to the running of the business.

Judge Linnane had previously stated that the scheme of arrangement would have to pay dividends to the historical creditors and ensure the company had a reasonable prospect of survival.

Mr Rory Kennedy, for Brady Kilroy Solicitors, asked Judge Linnane to extend the examinership until May 30th in order to allow Mr Kirby time to complete his report.

The judge heard that Donal MacNally Opticians had been taken over by a former director, Jed Dowling, for just under €2.7 million in March, 2016. He had resigned as managing director in November, 2018.

Mr Dowling had taken over the companies after having paid off the director’s loan account of fellow director Ian Tighe for €2,696,271.

Revenue told the court it had no objection to the extension of the examinership.

Donal MacNally Opticians has been operating in Dublin since 1960. There are other MacNally opticians trading in Dublin, which split off from the main group and are not part of this examinership process.

1 Life as a Facebook moderator: ‘People are awful. This is what my job has taught me’
2 How well paid do you think you are? Here’s how to work it out
3 Ombudsman upholds 8 tracker complaints against banks
4 Irish in-flight entertainment firm blames coronavirus for closure
5 Ibec warns that Government may have underestimated corporation tax loss
6 FBD rejects ‘insurance rip-off’ accusations as profits spike and dividend doubles
7 Flight attendent seeks High Court injunction against Aer Lingus
8 Wealthy investors’ legal challenge against Revenue fails
9 Tax burden on Irish households among lowest in EU
10 Coronavirus: ‘All bets are off’, says aircraft industry chief
Real news has value SUBSCRIBE