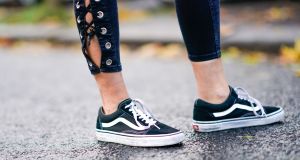 Primark, the Dublin-headquartered international retailer, which trades in its home market as Penneys, says it will fight a lawsuit against it by a US shoe company that has accused it of selling “knock-offs”.

Vans, the iconic US footwear brand beloved of skateboarders, is suing Primark in a New York court for trademark infringement. In recent weeks it filed proceedings against three Primark entities, including its main Dublin company.

Primark, which is ultimately owned by Associated British Foods, is currently engaged in a major US expansion, where in the last two years it has opened nine large outlets in the north-east, including in New York and Boston.

In court papers, Vans, owned by the same fashion group that owns brands such as Wrangler and Lee, describes itself as one of the “world’s great and most recognised brands”. It argues that its “Old Skool” and “Sk8-Hi” shoes have been famous worldwide since their launch in the 1970s.

Vans argues that its designs have “gained notoriety as the shoe of choice for skaters and other active sports enthusiasts”, and it also touts their association with the music industry and bands such as Slayer and Iron Maiden.

In August 2017, Vans says, its lawyers complained to Primark because the retailer was allegedly selling similar shoes in the UK, which the US company claimed breached its intellectual property rights.

The Primark versions, it is alleged, copied the side-stripe Vans trademark and other identifying features, including its famous “waffle soles”.

Vans says Primark soon stopped selling the similar shoes in the UK, and by January 2018, it considered the matter “closed”.

By August, however, it says it became aware that the “knock-off” skater shoes were being sold in the US in Primark’s new stores there. Vans claims this was a “calculated and intentional” move and a “blatant attempt to suggest a connection with Vans products”.

It accuses the Irish retailer of trademark infringement, unfair competition and false advertising and is seeking an injunction against it, as well as compensation and damages and an order to “impound and destroy” the alleged “knock-off” shoes.

“We disagree with the allegations by Vans and we plan to defend our position,” Primark said on Wednesday.

1 Can we finally say farewell to the scourge of hot-desking?
2 Irish pharma sector warns of protectionism as US corners supply
3 Why gift a son now if it eats into his tax-free inheritance threshold?
4 Mortgage arrears: Prevention is definitely better than cure
5 Flights abroad ban could last all summer
6 Welltel acquires IT service provider Novi in €3m deal
7 Warning over medical supplies, FDA approval and hot desk hell
8 Government to avoid ‘cliff-edge’ on Covid-19 payment changes
9 Uber agrees to acquire US food delivery group in in $2.65bn deal
10 Limerick-born entrepreneur gets FDA approval for respiratory monitor
Real news has value SUBSCRIBE