Beauty care company founded by Irishman files for bankruptcy in US 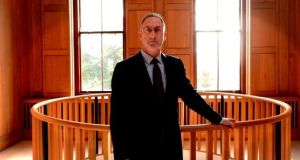 A New York-headquartered company established by Irish businessman Alan Ennis, who previously led cosmetics giant Revlon, has filed for bankruptcy protection in the US and laid off hundreds of staff.

Glansaol, a maker of beauty and personal care products whose brands include Laura Geller, Julep and Clark’s Botanicals, filed for chapter 11 protection in mid-December, reporting liabilities ranging between $10 million (€8.7m) and $50 million (€43.7m).

It said it was pursuing a quick sale of the company as a going concern to AS Beauty for $16.2 million.

As part of the bankruptcy Glansaol has shuttered its Seattle-based operations, laying off just over 100 employees at its Julep nail parlour subsidiary.

Ennis, a UCD and Arthur Andersen-trained accountant, was chief executive of Revlon, which reported revenues of $2.7 billion in 2017

Glansaol, which means “pure life” in Irish, was launched by the former Revlon president and chief executive Mr Ennis in 2016 with financial backing from private equity firm Warbug Pincus.

“Our objective is to build Glansaol into a world-class global beauty and personal care company by acquiring, integrating, and growing a portfolio of premium, complementary brands, managed by a team of seasoned executives,” said Mr Ennis at the time.

Mr Ennis, a UCD and Arthur Andersen-trained accountant, was chief executive of Revlon, which reported revenues of $2.7 billion in 2017, for more than four years until he left in late 2013.

He previously worked at Ingersoll Rand, with whom he moved to the US at the turn of the millennium. He is a former UCD Business Alumni of the Year.

Mr Ennis served as Glansaol chief executive until April of this year when he became the company’s chairman following the appointment of Nancy Bernardini as CEO.

In its bankruptcy filing Glansaol said it had been hit hard in recent years by an increase in online shopping and use of home shopping networks to buy beauty goods.

“The board and management team have thoroughly assessed all of our strategic options, and are confident that the proposed sale process represents the best path forward for the company. We are pleased to have entered into an asset sale agreement with AS Beauty and are excited for the future,” said Ms Bernardini.