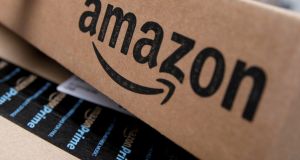 Amazon boxes are seen stacked for delivery in the Manhattan borough of New York City, US. Photograph: Mike Segar/Reuters

Amazon has reported a record-breaking holiday season as shoppers loaded their online baskets with items from Echo speakers to Calvin Klein clothes, suggesting consumer optimism is not being deterred by a tumbling stock market. The internet retailer said “tens of millions of people worldwide” signed up for its Prime service, which offers free two-day shipping on millions of items as well as video and music streaming.

In the US alone, more than one billion items were shipped for free using Prime, Amazon said in a statement Wednesday. The US was already headed into a blow-out Christmas shopping spree, as Americans are benefiting from higher employment and wages, fueling higher household cash flow. Consumers seemed to be merry despite a S&P 500 Index that has tumbled, a government shutdown that’s entering its fifth day and ongoing trade tensions with China. Amazon wasn’t the only one benefiting from an insatiable consumer appetite. Mastercard and Visa rebounded after four days of declines.

Mastercard said holiday sales increased 5.1 percent to more than $850 billion this year, the strongest growth in the last six years. Online shopping saw gains of 19 per cent compared with 2017, according to Mastercard SpendingPulse. Brick-and-mortar retailers also gained. Nike, Macy’s, Kohl’s and PVH were all higher mid-morning in New York. People bought “millions more” of Amazon’s own devices compared with last year, including the new Echo Dot speaker and the Fire TV Stick, the Seattle-based company said. At the same time, Amazon said more than 50 percent of items sold in its stores came from small and medium-sized businesses.

Among the most popular items under the Christmas tree were the LOL. Surprise! Glam Glitter Series doll, Bose wireless headphones and clothes from Carhartt. Other popular brands bought through Amazon’s Prime Wardrobe service, which allows consumers to fill a box with selected items and return anything that they don’t want, included PVH’s Calvin Klein, and Hanesbrands’s Champion.

Amazon started the shopping frenzy out strong, with November’s Cyber Monday already pegged as the company’s biggest shopping day in history. Along with the Christmas sales report, the picture seems much brighter than Amazon had initially projected in its latest earnings results. In October, Amazon’s revenue and profit forecast for the holiday quarter fell short of analysts’ estimates, as investors worried about Amazon’s increased pace of spending.

While Amazon has expanded into almost every area of retail, from pharmaceuticals to groceries, its more profitable units are cloud computing and advertising. Still, Amazon, which dominates e-commerce in the U.S., has relied on the growth of its Prime members, who pay $119 a year for the service. Recent estimates put subscribers at just under 100 million in the US Amazon didn’t give any new numbers for Prime subscribers in its statement Wednesday, but said millions of unique items in the US shipped with Prime.

That kind of volume presents a challenge for logistics services like FedEx and United Parcel Service. In 2013, a larger than expected surge in last-minute online shopping caught UPS off guard and forced it and Amazon and other retailers to offer refunds to customers who didn’t receive their orders on time for Christmas. - Bloomberg