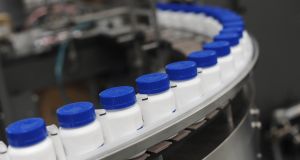 New accounts filed by US-owned Regeneron International Ltd show that the company recorded the sharp increase in pretax profits as revenues jumped by 44 per cent from $1.3 billion to $1.87 billion.

The Regeneron operation here has gone from strength to strength since it established its Irish head office at the former Dell site in Limerick.

The directors for Regeneron International said the increase in the value of its property, plant and equipment from $648 million to $749 million in 2018 was primarily due to renovations and additions to Regeneron’s Limerick facility.

The main activity of Regeneron International is the development and manufacture of drugs for serious medical conditions and the management of intellectual property.

The directors state that the increase in revenues can be attributed to the company’s share of profits of the commercialisation of eye-treatment drug Eylea outside the US.

The accounts show that $992.36 million of the company’s revenues were attributed to Eylea sales outside the US in 2018.

The Dublin-registered company is tax resident in Bermuda and in 2018 received a tax benefit of $806.49 million, resulting in a post-tax profit of €1.1 billion.

1 Getting out from under ‘never-ending’ Celtic Tiger debt burden
2 Brittany Ferries ends Cork-Santander route
3 Pensions: Estonia plans to unleash a potential €4.85bn on economy
4 Explainer: what is the row about SF’s multinational tax plan?
5 Britain after Brexit will not be alone, but it will be lonelier
6 Banks withdrawing from ATMs – another failure of regulation
7 Fair Deal nursing homecare leaves little for bills and gifts
8 Brittany Ferries announces new services to Spain and France from Rosslare
9 Money matters: ‘My father embarrassed us with his haggling’
10 More affordable iPhone 11 is unlikely star of Apple earnings
Real news has value SUBSCRIBE