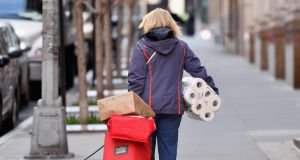 Procter & Gamble (P&G) posted a 6 per cent surge in organic sales, giving a glimpse into panic-buying of toilet paper and cleaning products as the Covid-19 pandemic spread.

Demand for Charmin bath tissue and Bounty paper towels helped drive a double-digit gain in the family care division during the fiscal third-quarter, although this was partially offset by the fact that people were buying products like toilet paper in cheaper bulk sizes.

Jon Moeller, chief financial officer, told reporters on a conference call that pantry loading more than offset declining sales in China. He also said he expected habits developed during the outbreak to continue.

While P&G maintained its full-year forecast for per-share profit gains, excluding some items, of 8 per cent to 11 per cent, Mr Moeller said on the investor call that “we’re closer to the bottom end of the EPS [earnings per share] guidance than the top end”.

This could suggest that the current intensive buying patterns will not last.

P&G reaffirmed its forecast for organic revenue growth of 4 per cent to 5 per cent. Core earnings per share were up 10 per cent and beat estimates.

Grocery store shelves around the world have been depleted of items like paper towels and cleaning wipes as people stock up to comply with stay-at-home orders. Other categories where P&G saw big gains were in home care, which include its Swiffer floor cleaners, and healthcare, made up of over-the-counter products like Pepto Bismol.

There could be months of sporadic production suspension, Mr Moeller told reporters, but retail inventory levels should return to normal as the company rebuilds stock.

He said US production in March was 22 per cent higher than the average over the previous 12 months. The company was also taking steps to protect the health of factory workers.

The spike in demand has also led P&G’s competitors to ramp up manufacturing, Mr Moeller said on the investor call, and could cause the company to lose market share to those with “with more flexible production”.

P&G’s e-commerce sales grew 35 per cent in the latest quarter.

JPMorgan analyst Andrea Teixeira said that when P&G moved up its release date from April 21st, most investors expected that the quarter’s results would be strong. While the earnings were better than anticipated, “organic revenue growth came in slightly below bullish expectations”.