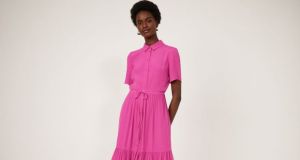 A model wears a dress from Warehouse’s 2020 range. The most recent company accounts for Oasis show that it employed about 220 people in the Republic, while Warehouse employed 95.

The High Court has appointed provisional liquidators to the Irish arms of related ladies fashion outlets Oasis and Warehouse.

The order was sought in relation to Oasis Fashions Ireland Ltd, and Warehouse Fashion Ireland Ltd, which the court heard is part of the Aurora Fashions group- owned by the Icelandic Kaupthing Bank.

The order to wind up the two firms, which between them employ 248 people at 13 stores and 29 concession stands in Ireland, comes after administrators were appointed to its UK parent. The group which the two Irish firms are part of had been seeking a buyer, but the impact of the Covid-19 which had resulted in the closure of high street stores, ended prospects of securing fresh investment, despite the fact there had been several expressions of interest.

On Wednesday evening Mr Justice Michael Quinn said he was satisfied to appointed Ken Fennell and James Anderson of Deloitte Ireland as joint provisional liquidators of the two related companies. The firms’ shareholder sought the orders to have the firm wound up. Seeking the joint liquidators’ appointment Kelley Smith Bl instructed by Barry Cahir of Beauchamps Solicitors, for the company said the appointment of administrators to the group mean the firms were insolvent.

Counsel said that the firms had been trading in difficult environment, and those difficulties were exacerbated with the outbreak of the Covid-19 pandemic. Counsel that going into administration amount to an event of default which had a negative impact on the two Irish firm’s banking and lease arrangements. The Irish companies counsel said were also totally dependent on their cash flow from their UK, as well as other services including HR and IT.

The two firms stores and concession stands, some of which counsel said were in Debenhams Department Stores which in recent days announced it is closing all its Irish stores with the loss of over 1000 jobs, have been closed since late March. Counsel said that that despite their closure the appointment of the provisional liquidators was seen to be in the best interests of all the parties including the employees. The liquidators would ensure that there would be an orderly wind up of the firms, counsel added.

The judge, after confirming the joint liquidator’s appointments made the matter returnable to a date later this month.Oasis is the bigger of the brands, with Oasis Fashions Ireland reporting sales in the Republic of €16.4 million in the year to March 2nd, 2019. This revenue was down 9 per cent amid a “difficult retail environment”.

Warehouse Fashion Ireland recorded sales of €6.5 million in the year to March 2nd, 2019, but made no operating profit. Its revenues were slightly ahead on the previous year, but had the benefit of an extra week’s trading.

The parent group’s move follows the recent appointment in the UK of administrators at Laura Ashley and Debenhams.

A previous Kaupthing attempt to find a buyer for both Oasis and Warehouse in 2016 failed.

Warehouse previously went into examinership in the Republic in 2014, but emerged from the restructuring in slimmed-down form. Its Irish balance sheet shows accumulated losses of €41.3 million, which have been plugged with shareholder equity calls. Oasis has never been in liquidation or examinership here.

The two brands were part of a wave of mid-priced women’s fashion retailers that expanded in Ireland from the 1990s onwards.

Although their product styles frequently overlap, Oasis has in recent years skewed to a slightly younger demographic than Warehouse, putting a greater emphasis on casual and bohemian touches, while Warehouse gives more floor space to party wear and office wear. – Additional reporting: Reuters